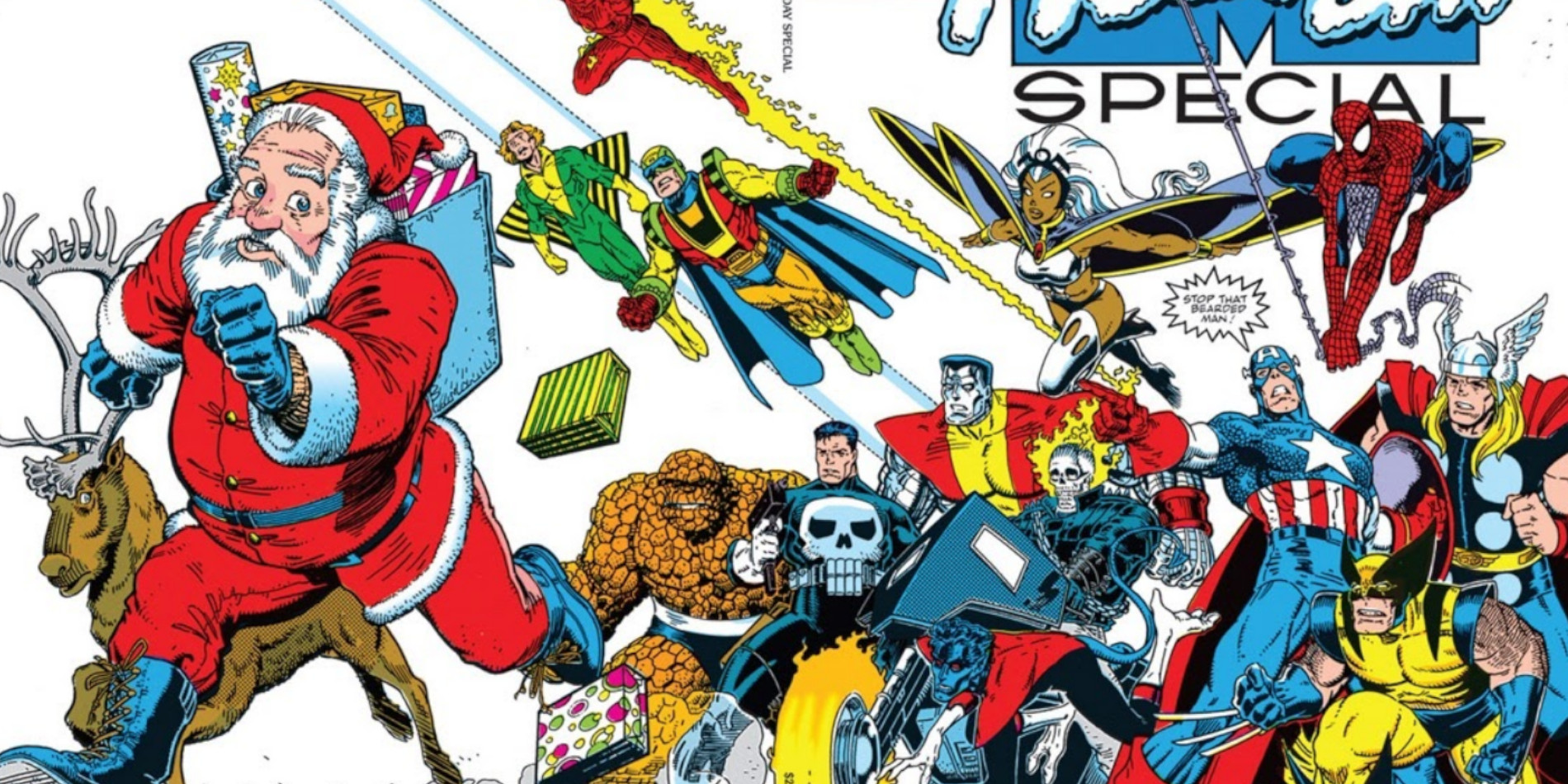 Santa Claus is, without a doubt, the icon of the festive season in many corners of the globe. The jolly man in red has been seen in a load of media, from beloved poems like The Night Before Christmas to movies like The Polar Express. And, of course, Santa has made many appearances in comic books. But the Santa found in the Marvel comics universe is highly unusual, presenting a unique take on the Kris Kringle we all know and love.

The origins of Marvel Santa

One of the most fascinating parts of this segment is that it found Santa’s first Marvel comic appearance. The character made his debut in 1955’s Strange Tales #34 (though it should be noted that Marvel was still known as Atlas Comics at the time). Santa appeared in a tale called “Moment Of Glory,” where he materialized to help a down-on-his-luck car mechanic realize how lucky he was. However, this version of Santa was vastly different from the man seen in later Marvel comics.

Interestingly, the Marvel Holiday Special lists off several real-world origins for Santa and similar winter festive figures before describing the Santa found within the Marvel universe by saying:

“The precise origins of Santa Claus are unrevealed, but Santa Claus is actually a magical being composed of elements of the various beings described above. Humanity’s collective beliefs in these legendary figures merged with spiritual energy, and aspects of the beings themselves gave him form as a manifestation of the spirit of giving associated with Christmas and other such holidays.”

This guide also links most of Santa’s appearances up to that point. So it retroactively makes Marvel’s Santa a cohesive character rather than a series of unlinked cameos.

One of the oddest Santa appearances in the Marvel universe comes in Nick Fury, Agent of SHIELD #10, which hit shelves in 1968. In this story, Hate-Monger (himself a clone of Hitler) rises from the grave and tries to wipe out most of humanity using a germ bomb.

However, Hate-Monger sends two fighter planes after the bomb to guarantee it lands. While these planes are in the air, an unidentified object sweeps past at high speed, clipping one of the planes. This causes the plane to crash into the bomb, ruining it. While not seen, Fury believes that this unidentified flying object is Santa Claus on his sleigh.

The previously mentioned “Official Handbook of the Marvel Universe: Santa Claus” includes this storyline, confirming that it was actually Santa who did the deed.

Interestingly, Marvel’s Santa isn’t always the jolly old pacifist that traditional carols make him out to be. This is seen in 1986’s Peter Parker, The Spectacular Spider-Man #112.

When Spider-Man learns that a mall Santa is tricking kids into letting him inside so he can rob them, he quickly swings out to stop him. However, while chasing the criminal, Spider-Man encounters the real Santa. This Santa seems very angry that someone is using his identity for evil.

(Interestingly, this Santa also complains about the 1984 slasher film Silent Night, Deadly Night, which also featured a villain dressed up as Santa.)

The next day, the thief is found in the Daily Bugle office, giving out toys to children. The former criminal announces he has turned himself in as, after a talk with the real Santa, he has decided to mend his ways.

And anger isn’t the only way Marvel Santa differs from his traditional counterpart. 1989’s Sensational She-Hulk #8 gave Marvel fans a version of St. Nick that loves to play detective and is an unrepentant flirt.

This story sees She-Hulk trying to find evidence in a murder case. As she tries to find something, she is called by Nick St. Christopher, a detective who says he has some leads. This man helps She-Hulk get into places via their chimneys, leading to a few breakthroughs.

As the case continues, Nick St. Christopher starts flirting with She-Hulk. Even giving her a special Christmas present. This comes to a head at the end when She-Hulk asks who Nick St. Christopher really is, only for Nick’s wife to turn up and drag him home. And, to make matters worse, a load of Reindeer dung appears in She-Hulk’s office.

And, while it isn’t revealed in the comic itself, the “Official Handbook of the Marvel Universe: Santa Claus” does confirm that Nick St. Christopher is actually Santa.

However, it would be Santa’s meeting with the X-Men that would really shape the Santa character within the Marvel universe. In 1991’s Marvel Holiday Special, there is a story called “A Miracle a Few Blocks Down From 34th Street.”

In this story, the X-Men are having fun decorating their Christmas tree when Cerebro, a mutant-locating device, informs the group that it has detected the “most powerful mutant ever registered.” The X-Men head out to find out who this mutant is, but they find that the Brotherhood of Evil Mutants has also turned up, keen to recruit this new mutant to their side.

However, both are surprised to learn that this new mutant is Santa Claus. Santa turns the Brotherhood of Evil Mutants into toys before teleporting the X-Men away, wiping their memories of the fight. He then explains he won’t choose sides during Christmas. But he does give the city a white Christmas to make up for it.

This appearance shows that Marvel Santa is not to be messed with. And it is one of Santa’s most known appearances in the Marvel universe.

Deadpool and “Let himself go” Santa

2018’s Deadpool #7 gave Marvel fans the most off-kilter version of Santa ever made, which is fitting considering Deadpool’s overall tone.

This story sees Tinsel, one of Santa’s elves, getting annoyed with Santa’s refusal to monetize. Because of this, Tinsel turns the other elves against Santa, causing them to all leave the North Pole. Without his elves and without his wife, Santa goes feral. Taking on a dirty, gaunt appearance and often only wearing his filthy y-fronts. Plus, he develops a potty mouth, screaming obscenities near-constantly.

Due to this, Santa doesn’t deliver presents. A group of kids, upset by the lack of gifts, hires Deadpool to kill Santa, something Deadpool agrees to happily. However, when he gets to the North Pole, he learns that Santa isn’t going down without a fight.

This shows that Santa is one of the most powerful beings in the Marvel universe. While his status of “most powerful mutant” might be debatable, the fact that Santa has done all of this stuff shows that he is strong, at least on the level of most of the Avengers.

And this isn’t the only time Santa has been seen within Marvel Comics, as he’s also appeared in some other Marvel universes. For instance, Marvel Holiday Spectacular 2009 gave readers a version of Santa who can handle the Infinity Gauntlet and survive. Which makes him one of only a select few people. And, in 1991’s What The–?! #16 Doctor Octopus captures Santa and forces his elves to make evil toys. However, one of these toys hurts Cassie Lang, Ant-Man’s daughter. When Ant-Man shrinks Doc Ock down to fight him, Santa can return both men to regular size, meaning that Santa can control Pym particles.

Basically, if you’re on the naughty list in the Marvel universe, you better watch out.