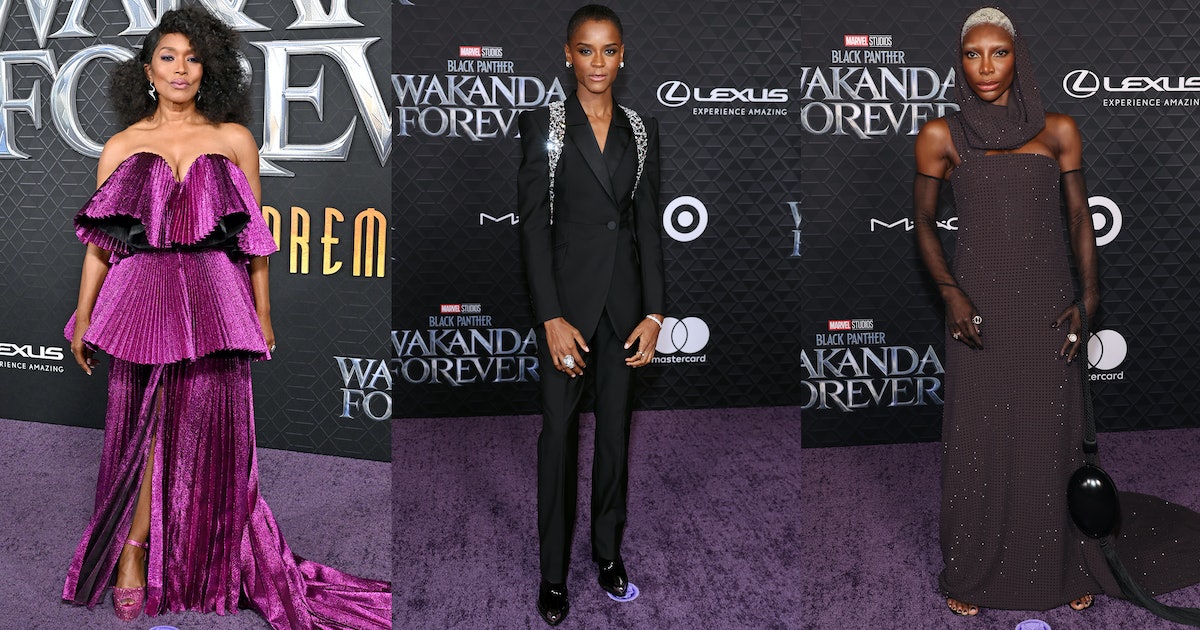 Yes, all eyes were, of course, on Rihanna last night at the premiere of Black Panther: Wakanda Forever as she and A$AP Rocky made their first official red carpet appearance since becoming new parents earlier this year. But they were hardly the sole attendees at the event, and while they looked great in their coordinating outfits, they were definitely not the only ones turning it out, style-wise. At the premiere of the Black Panther sequel on Wednesday night, the cast of the film really showed up, bringing exciting color, texture, and silhouettes to the event—and proving they’re truly the best-dressed cast in the Marvel Cinematic Universe.

It seems only fair to start with the Queen of Wakanda, Angela Bassett, who took over the carpet in a strapless, magenta dress with tiered accordion pleats from Moschino. A slit in the skirt showed off the actress’s sparkly pink platform Le Silla heels, and silver spiral earrings from Reza finished off the ensemble.

Danai Gurira, meanwhile, almost seemed to match Bassett, wearing a dress in a similar, metallic magenta hue with an accordion-style asymmetric skirt and a bodice of exploding ruffles from Robert Wun’s spring 2023 collection.

Next up has to be Michaela Coel, who is making her MCU debut in Wakanda Forever. It’s a big moment, and Coel dressed accordingly, wearing a custom Ferragamo dress based on a look from Maximilian Davis’s debut collection for the brand. The rich brown hue played into a notable, growing red carpet trend, while the strapless column dress provided the perfect base for the geometric neckline and head wrap that brought the look to the next level. Coel and her stylist, Georgia Medley, then finished off the ensemble with sheer black gloves, a unique egg-shaped bag on a rope, a trio of rings, and a shock of white hair.

Speaking of hair, Lupita Nyong’o without a doubt took the cake for best ‘do of the evening. The actress wore a white version of a dress from Balmain’s spring 2023 collection. The twists and braids that characterized the look were then referenced again on the back of Nyong’o’s head, where ropes created an intricate and beautiful hairstyle, finished off by a halo of shells. De Beers jewels added a final touch of glamour to the look.

And while there were dresses galore on Wednesday night, Letitia Wright provided a brief reprieve in the form of an Alexander McQueen spring 2023 suit. The black set is fairly straightforward in the front, aside from the columns of jewels that climbed down her shoulders. The back, though, was where things really got fun, thanks to the continuation of the jewels and selective cutouts. Wright also used the event as an opportunity to show off her newly shaved head, which added to the sleek overall look of the ensemble.

But it wasn’t just the Black Panther cast that showed up to the red (or rather, purple) carpet. There was Rihanna—but also Tessa Thompson (who is in the MCU, but not Wakanda Forever, unless some surprise cameo is coming our way). The actress went for a simple yet effective look, wearing a strapless white Saint Laurent dress with a slightly A-line silhouette and pockets. Halle and Chloe Bailey, meanwhile, opted to bring the glam, walking the red carpet hand-in-hand in black looks. Halle went down a slightly simpler route in a strapless Maticevski dress with a corseted torso. Her sister wore a black sequin long-sleeve dress by Shermay Joh with a deep-v neckline and slits that reached her waist. A braided crown and diamond necklace from Untamed Petals completed her look.

All of these, combined with the Rihanna and Rocky appearance, made for quite the event. Still, we can’t help but feel selfish and hope to see at least one more premiere from this stylish cast before the film’s release next month.