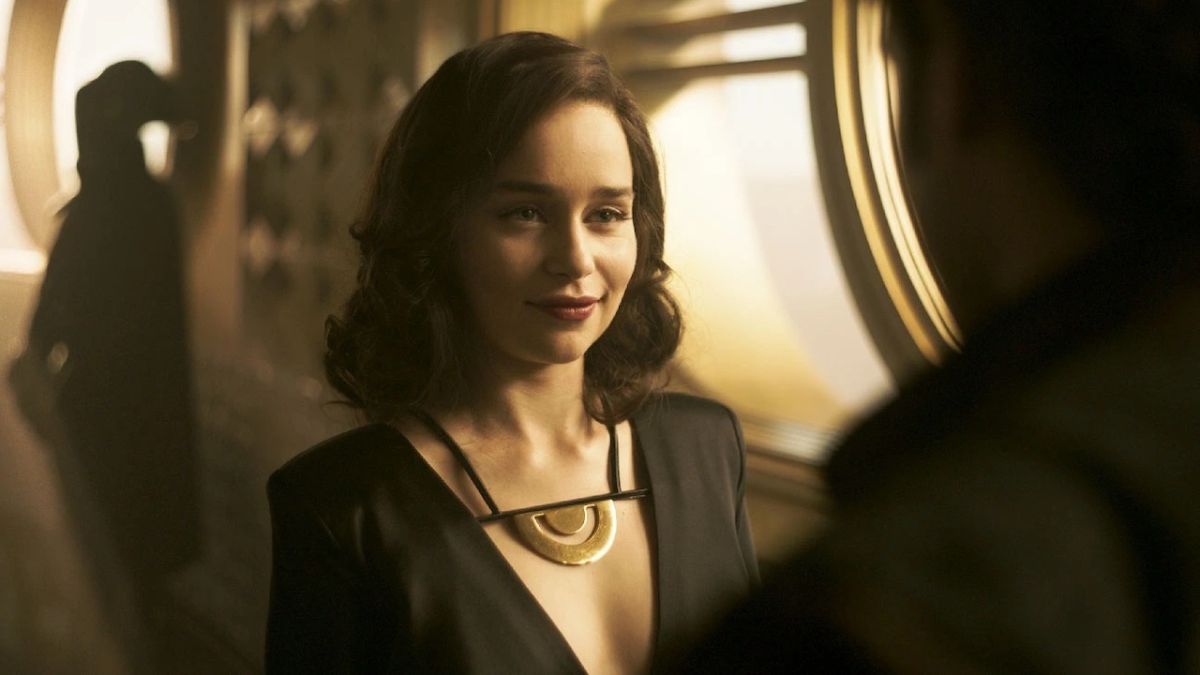 Having already gained worldwide popularity for playing Daenerys Targaryen in Game of Thrones and left her mark on the Star Wars franchise as Qi’ra in Solo: A Star Wars Story, now Emilia Clarke is lending her talents to the Marvel Cinematic Universe. The actress was cast in the upcoming Secret Invasion limited series back in April 2021, but until today, the identity of her character has been kept a tightly-guarded secret. But evidently it’s now been given away that Disney+ subscribers will see Clarke playing a popular Marvel mutant.

Secret Invasion has its own account on the gif website Tenor, and you know it’s the real deal by the verified check mark. All of the gifs on the account so far come from the first Secret Invasion trailer, including when Emilia Clarke’s character says “This is just the beginning” (shortened in the gif to just “It’s the beginning”). At a glance, this isn’t anything special, but if you look closely, the Clarke gif is called “Its The Beginning Abigail Brand GIF.” So assuming the person running the Secret Invasion Tenor account didn’t just throw that name in there for the hell of it, evidently Clarke is playing Abigail Brand, who’s been part of Marvel Comics lore for nearly two decades.

Created by Joss Whedon and John Cassaday, and making her first full appearance in 2004’s Astonishing X-Men #4 after cameoing in the prior issue, Abigail Brand is a green-haired half human mutant/half alien. She has the ability to cover her hands in flames hot enough to burn through most metals, which stems from her mutant DNA rather than her alien roots. Abigail is best known in the comics as the leader of the Sentient World Observation and Response Department (S.W.O.R.D.), a S.H.I.E.L.D. counterpart that focuses on protecting Earth from extraterrestrial threats. She has previously appeared on the animated TV shows Iron Man: Armored Adventures and The Avengers: Earth’s Mightiest Heroes, and was an NPC in the games Marvel Avengers: Battle for Earth and Marvel: Avengers Alliance Tactics.

We’ve already spent some time with S.W.O.R.D. in the MCU through WandaVision, although the acronym stands for something different: Sentient Weapon Observation Response Division. In other words, the MCU’s S.W.O.R.D. purview extends beyond extraterrestrial threats, though since Secret Invasion is about a faction of the shapeshifting Skrulls infiltrating our society, it makes sense the organization would get involved. As for Emilia Clarke, assuming she is indeed playing Abigail Brand, I have some questions.

First, is she affiliated with S.W.O.R.D., and if so, is she leading the organization or is she a lower-ranking member during the events of Secret Invasion? My money’s on the latter since Monica Rambeau is better positioned to take over the group following WandaVision (assuming she doesn’t join the Avengers after The Marvels), but maybe Secret Invasion will pave the way for Abigail to start calling S.W.O.R.D.’s shots. Second, with Iman Vellani’s Ms. Marvel having been revealed as the MCU’s first mutant and Tenoch Huerta’s Namor the Sub-Mariner also confirmed to be a mutant, will Emilia Clarke’s Abigail retain her mutant background or has that been set aside? Finally, that gif of Clarke has her sporting brown hair, so has the MCU ditched Abigail’s traditional green hair, or will she get it later down the line through yet-to-be-revealed circumstances.

As often happens in the MCU, certain answers pave the way for more mysteries to be pondered, but hopefully Marvel Studios will confirm whether or not not Emilia Clarke is actually playing Abigail Brand sooner rather than later. Either way, look forward to Secret Invasion premiering on Disney+ sometime in early 2023, with Clarke’s castmates including Samuel L. Jackson, Ben Mendelsohn, Cobie Smulders, Martin Freeman, Don Cheadle, Kingsley Ben-Adir and Olivia Colman, among others.