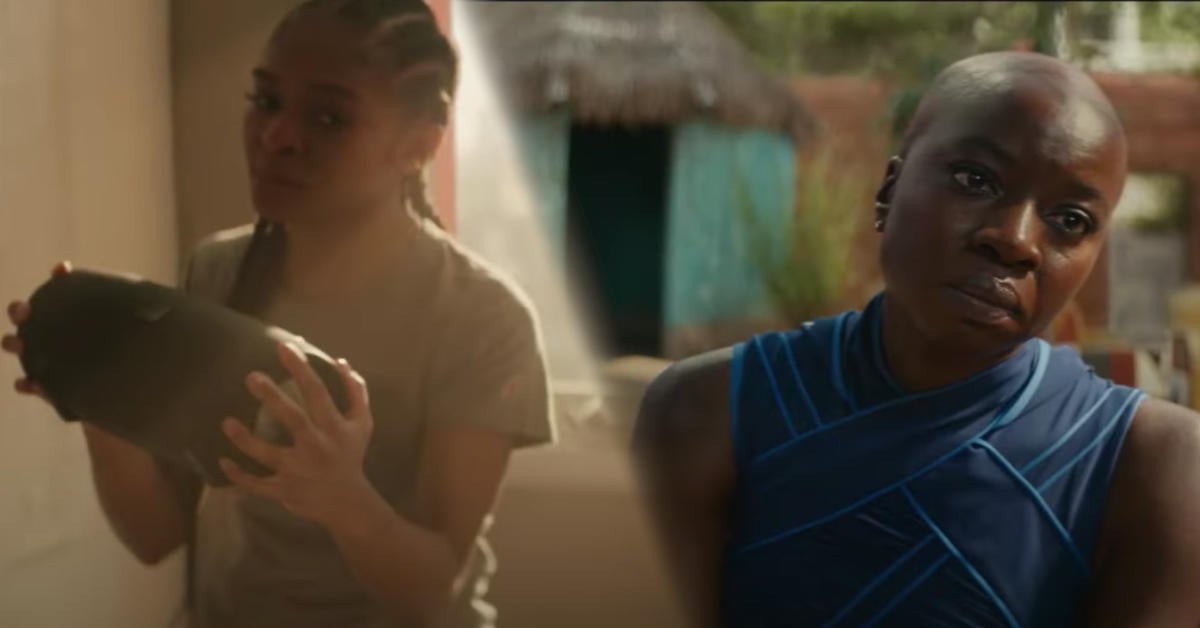 Black Panther: Wakanda Forever has released two new clips, following the film’s big premiere. The clips made their debut on Jimmy Kimmel Live, where Black Panther 2 stars Lupita Nyong’o, Danai Gurira and Letitia Wright showed up on the couch to promote the movie. The clips from Wakanda Forever and the interview with Kimmel all centered on the elephant in the room: the loss of Chadwick Boseman and the absence of his King T’Challa.

The first new clip from Black Panther: Wakanda Forever sees Okoye (Danai Gurira) and Nakia (Lupita Nyong’o) sit down to share their grief over T’Challa’s death. Nakia is particularly affected, as the scene reveals that she was not in Wakanda or with T’Challa when he passed.

The second clip from Black Panther 2 sees Okoye and Shuri (Letitia Wright) paying a visit to Riri Williams (Dominique Thorne) in her dorm room. The visit doesn’t start on the right foot: Riri seems freaked to see the leader of the Dora Milaje on her doorstep and tries to resist – only for Okoye to bring out her spear and settle the matter for good. However, in a twist, Okoye is very much impressed with Riri’s spunk.

These two clips at once show us the range of tones that we’ll find in Black Panther: Wakanda Forever. The first clip is very meta and serious in its dual-level exploration of the loss of a fictional character and real actor. The second clip is much lighter in tone, with playful banter and humor. Both clips highlight the subtle teases that Wakanda Forever will be putting the ladies of Wakanda front and center of the franchise – and possibly for much of the screen time of the sequel film.

Here’s more on the story from the new Black Panther: Wakanda Forever synopsis:

One year after T’Challa’s death, Wakanda’s Queen Ramonda (Angela Bassett), Shuri (Wright), M’Baku (Winston Duke), Okoye (Danai Gurira) and the Dora Milaje (including Florence Kasumba) fight to protect their nation from intervening world powers. As the Wakandans strive to embrace their next chapter, the heroes must band together with the help of War Dog Nakia (Lupita Nyong’o) and Everett Ross (Martin Freeman) and forge a new path for the kingdom of Wakanda.

MORE: Black Panther 2 First Reactions – What Do They Say?

Black Panther: Wakanda Forever will be in theaters on November 11th.