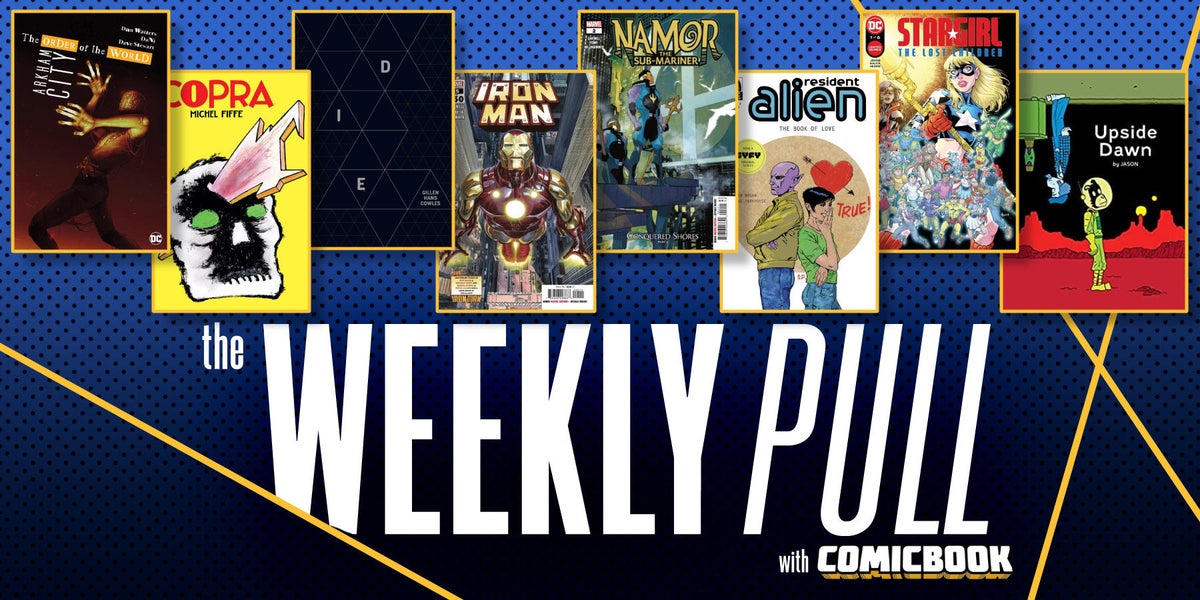 It’s almost another new comic book day, which means new releases hitting stores and digital platforms. Each week in The Weekly Pull, the ComicBook.com team highlights the new releases that have us the most excited about another week of comics. Whether those releases are from the most prominent publisher or a small press, brand new issues of ongoing series, original graphic novels, or collected editions of older material, whether it involves capes and cowls or comes from any other genre, if it has us excited about comic books this week, then we’re going to tell you about it in The Weekly Pull.

This week, Iron Man comes to an end, Stargirl returns, and DIE gets its big hardcover collection. Plus, Copra‘s Master Collections begin to roll out, Jason returns with a new collection of short stories, Resident Alien is back, and more.

What comics are you most excited about this week? Let us know which new releases you’re looking forward to reading in the comments, and feel free to leave some of your suggestions as well. Check back tomorrow for our weekly reviews and again next week for a new installment of The Weekly Pull.

Arkham City: The Order of the World

Dan Watters and Dani, the team behind Image’s gloriously unhinged Coffin Bound, could do anything in the DC universe and it would be a must-read for me. But Arkham City: The Order of the World manages to be a fascinating book on so many other accounts — for its ensemble of underappreciated Batman villains, its gruesome storyline, and its under-the-radar place in the larger DC universe. This week’s collection finally offers an opportunity to experience the story in a single bout — and trust me, you owe it to yourself to do that. — Jenna Anderson

Michael Fiffe’s grungey and gritty indie comics masterpiece Copra is among the best superhero comics in recent memory, and not nearly enough people have discovered it, even with its brief stint at Image Comics. While Fiffe has gone back to his self-published roots for new issues of Copra, Image Comics is continuing to handle collected editions, including this Copra Master Collection. Celebrating Copra’s 10th anniversary, this volume collects Copra’s first 12 issues in oversized hardcover format for the first time. There’s never been a better opportunity for newcomers to get on board with the series or a better excuse for fans to revisit these earliest issues. If Image Comics follows through collecting the rest of the series in the same format, this could be the definitive way to read Copra. — Jamie Lovett

Shortly after DIE: The Roleplaying Game debuted its digital edition to the world, the definitive edition of this modern comics classic arrives in a titanic hardcover collecting all 20 issues and some outstanding backmatter. If you read the series in any format, you’ll already know the appeal of this beautiful volume, collecting one of the best Image Comics series of the past decade – it merits a place of honor on the bookshelf. If you haven’t read DIE, believe the hype. Writer Kieron Gillen delivers a nuanced treaty on the nature of games and how they reflect essential understandings of humanity in an epic steeped in history with a sweeping scope. It’s also a great adventure driven by memorable characters. The story possesses range and is bound to appeal to readers on multiple levels; that’s ensured by Stephanie Hans’ outrageously appealing artwork. Each page turn is capable of building worlds and the fluid colors and style capably capture a wide array of genre tropes. DIE is a masterpiece; that much has been said with certainty since #20 debuted. Yet it’s difficult to imagine a better format to present or read that masterpiece in than the hardcover coming this week. — Chase Magnett

No Marvel book has consistently surprised and awed me like this current stint of Iron Man, which releases its final issue this week. Writer Christopher Cantwell and an exceptional roster of artists have made me fall in love with Tony Stark — and the larger Marvel universe — over and over again. While I’m sad to see this chapter in Tony’s story end, I know that Cantwell, Angel Unzueta, and company will most likely deliver a poignant and perfectly weird finale. — Jenna Anderson

The fact that Black Panther: Wakanda Forever is now in theaters is just one small reason why I think everyone should read Namor the Sub-Mariner: Conquered Shores #2 this week. It certainly is one reason — Namor is having his moment so please go read comics about this great character — but this book in particular is dealing with an older, wider, and more pensive Namor who is reflecting on his life and looking to protect humanity in the wake of ecological collapse. The second issue digs a bit more into Namor’s growing frailty as he ages. There’s not much I can talk about regarding this issue without spoiling parts of the story, but it delves into Namor’s history, particularly with the Fantastic Four, and adds an interesting emotional level to things as the story gets even deeper. It’s a book you don’t want to miss. — Nicole Drum

Resident Alien: The Book of Love #1

The return of Resident Alien is always a pleasant surprise. While the SyFy series has captured many fans with its idiosyncratic and humorous charms, the comics have always possessed a much more low-key mood that finds its spark in juxtaposing one outlandish element against realistic rural landscapes and peoples. It’s a familiar and warm read. That makes its return all the more exciting as there are still federal agents crawling across Oregon and new romances in the offing. Like a call from back home, it’s filled with exciting updates on people you like and know. The realism embedded in these relationships carries a lot of dramatic weight and ensures that readers will keep seeking out their next trip to Patience. — Chase Magnett

As a huge fan of Stargirl, it just seems fitting that one of my recommendations this week is Stargirl: The Lost Children. The series sees Courtney Whitmore/Stargirl and Emiko Queen/Red Arrow team up to go in search of a missing teen hero from the past and discover that he’s not the first teen Golden Age hero to go missing. The story in a sense is a continuation of Stargirl: Spring Break Special from last year and also ties into Johns’ new Golden Age and JSA series. There are also some fun visual Easter Eggs for fans of The CW’s Stargirl (though the two are not connected). And it’s just a good story — which makes it a great choice for Courtney Whitmore fans as well as for any reader looking for a fun mystery. — Nicole Drum

Norwegian cartoonist Jason is a fantastic cartoonist with a distinct style, usually employing anthropomorphic animals, and a taste for idiosyncratic, if not outright absurd stories. Any time a new volume of his work is released is a cause for celebration, but I’m particularly excited about Upside Dawn because it collects Jason’s work in sci-fi, one of my favorite genres. The stories include David Bowie, dinosaurs, Dracula, and Mr. Spock, in stories with influences ranging from Hitchcock to Kafka to dada. That’s a hard package to pass up. — Jamie Lovett