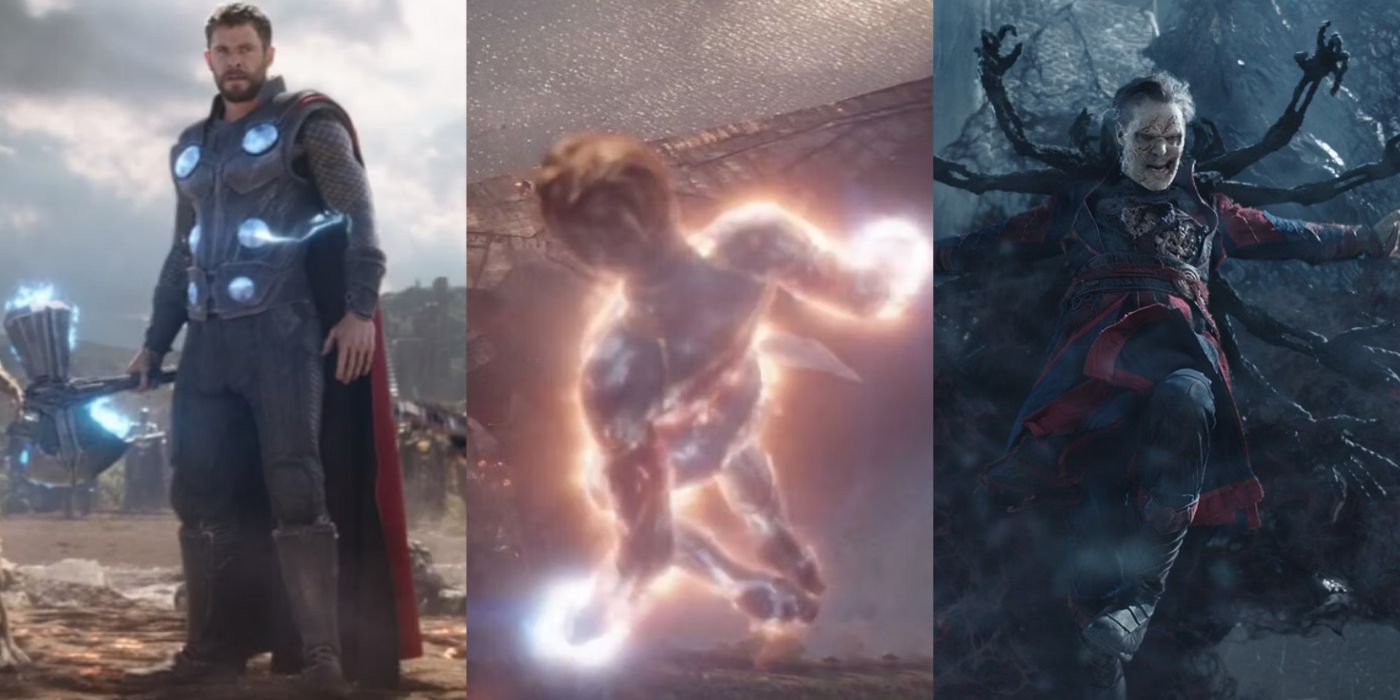 Hugh Jackman reprising his role as Wolverine in Deadpool 3 is some of the most exciting news there’s ever been in the MCU, and fans want to see Logan wear the classic yellow suit. So much fan art of the mutant in the classic outfit has been made as a result of the announcement, and if it happens, it could be the coolest moment in the Marvel Cinematic Universe.

However, it isn’t like the MCU hasn’t been full of cool sequences up until now, and Redditors have debated which is the coolest of them all. Between Doctor Strange dream walking and Matt Murdock being a really good lawyer, superheroes should put as much effort into keeping the world safe as they do into looking cool.

It has become a tradition that every Avengers movie has a “hero shot,” which is an epic shot that pans around the superheroes striking cool poses, but Infinity War completely subverted expectations when it came to the typical shot. Instead of panning around every Avenger, Infinity War’s hero shot simply focused on three characters as they crashed down to Wakanda.

The shot pans around Thor now wielding Stormbreaker with his new allies, a machine gun-carrying rocket, and a teenage Groot. Reddit user Shady_Hound thinks it’s the coolest scene in the MCU, noting, “Thor entering Wakanda with Stormbreaker and solo-ing Thanos’ army while screaming ‘Bring me Thanos!'” It’s one of the best superhero entrances in the MCU, and not even Endgame could beat it.

Shang-Chi and the Legend of the Ten Rings was such a welcome movie when it was initially released, as it marked the first exclusively theatrical MCU release after the pandemic. And the MCU couldn’t have returned in a cooler fashion.

Any number of scenes in the 2021 movie could be argued as the coolest in the MCU, but Theycallmegregarious thinks “Wenwu (Tony Leung) in a suit going into a gangster bar, using the rings to block a shotgun blast, and just beats the living crap out of them while his kid watched was just badass.” The Redditor isn’t alone, as superproducer Kevin Feige himself would probably agree. The Marvel Studios producer said that Leung is the only actor he’s ever been starstruck by, calling him an “otherworldly star directly from the sky.”

So many characters have lifted Mjolnir over the course of four Avengers movies and four Thor movies, making it less exciting each time it happens. However, watching Steve Rogers catch the hammer in Endgame will never not lead to hoots and hollers from audiences. And MarvelousJoe believes that it was easily the coolest moment in the MCU.

The Redditor explains, “Cap wielding Mjolnir and using it effortlessly and even combining attacks with his shield. Great stuff that I hadn’t even seen done in the comics. Some of the best fight choreography for the character.” What makes the moment even cooler is that it pays off one of the best gags in the MCU, as Thor was worried that Steve could lift the hammer at the party in Avengers: Age of Ultron.

The MCU has had some great needle-drops, especially the Guardians of the Galaxy movies, as music molded who Star-Lord is. But BigMikey128 posits that the best needle-drop and the coolest moment in the MCU are when “The Immigrant Song” by Led Zeppelin plays in Thor: Ragnarok. The Redditor thinks “Thor fighting off the entire army at the end of Ragnarok whilst ‘The Immigrant Song’ cranks in the background.” is easily the coolest sequence.

Thor is generally a cool character, as not only was his Infinity War entrance cool, but Endgame’s Thor is directly influenced by the Dude from The Big Lebowski, one of the coolest characters in cinema history. But the fight sequence soundtracked by one of the coolest songs ever recorded beats all of them.

Of all the heroes’ introductions, Captain Marvel’s does not get mentioned as much as it should, and AlwaysSunnyDragRace believes it’s the coolest scene in the MCU. The Redditor explains, “The cannons on Thanos’ spaceship stop and turn to the sky and everyone is very confused. Then Captain Marvel emerges. Gives me the chills just to think about it.”

It might not have made any sense why Captain Marvel sat out of the battle until that moment, as it was simply brushed off with the fact that she was basically too busy. But while it was possibly the biggest example of deus ex machina in cinema history, which is when the heroes are miraculously saved when they’re at their lowest moments, it’s still one of the coolest moments in the MCU.

Doctor Strange in the Multiverse of Madness was a very different movie from what MCU fans are used to. The film heavily featured visionary director Sam Raimi’s brand of horror comedy, which led to some of the most ridiculous but exciting moments in the final act of the 2022 release. One Redditor argues that Strange’s dreamwalking is the coolest thing to happen in the universe, positing, “As a heavy metal and horror fan, it has to be Strange possessing his own corpse and weaving a cloak out of souls of the damned.”

The cloak of screaming skulls could have had way more screentime, and it was a perfect replacement for the Cloak of Levitation’s absence. However, Zombie Strange balances the “cool” scale, as the way he winks at America might be the uncoolest thing to happen in the MCU, which makes it that much funnier.

When considering what moment in the MCU is the coolest, Wildjonquil simply states, “Matt Murdock, the really good lawyer.” While there were so many wild predictions about who might show up in Spider-Man: No Way Home, nobody expected to see Matt Murdock, a.k.a. Daredevil.

Not only did the scene confirm that Matt Murdock is in the MCU, and Charlie Cox is reprising the role from the Netflix series, but it was such a cool introduction, as he so skillfully catches a brick that’s thrown at him from behind. However, there’s no way that either Peter Parker or Happy wouldn’t have questioned what just happened. Nevertheless, it doesn’t take away from how cool it was. And as Matt wasn’t all that cool in the Netflix series, the upcoming 18-episode series Daredevil: Born Again will hopefully feature more of this coolness.

There are a lot of problems with the wedding sequence in Doctor Strange in the Multiverse of Madness, whether it’s the random cat-loving or drinking red wine in a wedding dress. However, TheBurnedMutt45 thinks the coolest scene in the MCU is “Probably Doctor Strange’s wedding exit” in the 2022 movie.

There’s no better way to leave a wedding where Strange is miserable than casually jumping off a balcony with his sentient cloak chasing after him and then saving New York from a giant one-eyed monster with tentacles. Strange might have confessed that he isn’t happy, but there’s no denying how cool he is in this scene.

Wanda’s Transition Into The Scarlet Witch

WandaVision was the very first MCU Disney+ series, and it remains the best, as an almost Lynchian mystery unfolded, and it had a genuinely risky and tragic ending. But it also delivered what fans had been waiting to see for years — Wanda finally becoming the Scarlet Witch.

Legitimate_Plant8223 thinks it’s the coolest MCU sequence, exclaiming, “Wanda becoming the Scarlet Witch! That scene was so cool! And the music for it was absolutely great!” The sequence had such a well-balanced tone, as the evolution was terrifying, but it also had a hammy and almost Hocus Pocus-like feel to it. But, ultimately, Wanda wearing that red crown surrounded by red smoke and thunder was nothing less than cool.

Tony’s Disbelief In His Own Invention

Christ182 thinks the moment in Captain America: Civil War when Tony Stark’s (Robert Downey Jr.) suit absorbs Bucky’s bullet is the coolest MCU scene. The Redditor adds, “My favorite part is that awesome nanosecond of acting from RDJ where he looks in disbelief for the shortest second that Bucky actually fired and it didn’t hurt him.”

The moment is a great example of why Downey was perfectly cast as Stark. But the whole of Civil War is full of cool moments, such as Ant-Man turning into Giant-Man and Spider-Man stealing Captain America’s shield. And any one of them could be crowned the coolest in the MCU.

NEXT: 10 Times Steve Rogers Should Have Died & Only Survived Because Of Plot Armor