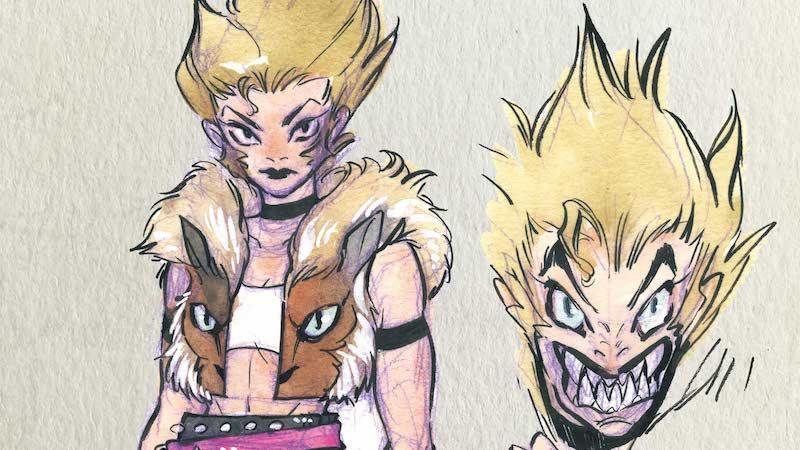 Gwen Stacy of Earth-65, a.k.a. Ghost-Spider, teamed up with heroic versions of herself from throughout the Marvel Multiverse in the pages of the hit series, Spider-Gwen: Gwenverse. However, next March, she’ll have to confront her dark side when twisted clones of herself are moulded into Spider-Man’s most iconic villains and unleashed in Spider-Gwen: Shadow Clones.

After designing the looks for Gwen Stacy versions of Captain America, Thor, and more for Spider-Gwen: Gwenverse, Momoko has once again lent her visionary talents to craft all-new looks for these five sinister foes. You can see Gwen transformed into fierce new versions of Spider-Man’s greatest villains on the eye-catching design sheets below that will also be variant covers.

“When designing the Gwen-villains, I wanted to make sure the original villain’s color palette was mainly used and give the energy, youth, and fun that Gwen represents,” Momoko explains.

Hailing from an alternate reality where Gwen was bitten by the radioactive spider, Ghost-Spider (or Spider-Gwen as we prefer to call her) has been embraced by comic fans since she debuted in 2014. Over the years, readers have watched Ghost-Spider rise as one of Marvel’s brightest heroes but now they and Gwen alike will witness her at her most twisted!

Why do these sinister clones all look like Gwen? We’ll follow the hero down a dark path as she must find and stop whoever is cloning her into infamous Marvel villains.

You can check out Momoko’s spectacular designs below, and be there to witness Ghost-Spider’s life get turned upside down by these strange new enemies when Spider-Gwen: Shadow Clones debuts in March.

Bring on the bad Gwens! 🕸️ Check out all of Peach Momoko’s new designs for ‘Spider-Gwen: Shadow Clones’ debuting this March: https://t.co/kVT5yNd0Hn (2/2) pic.twitter.com/T9nhcefHF9