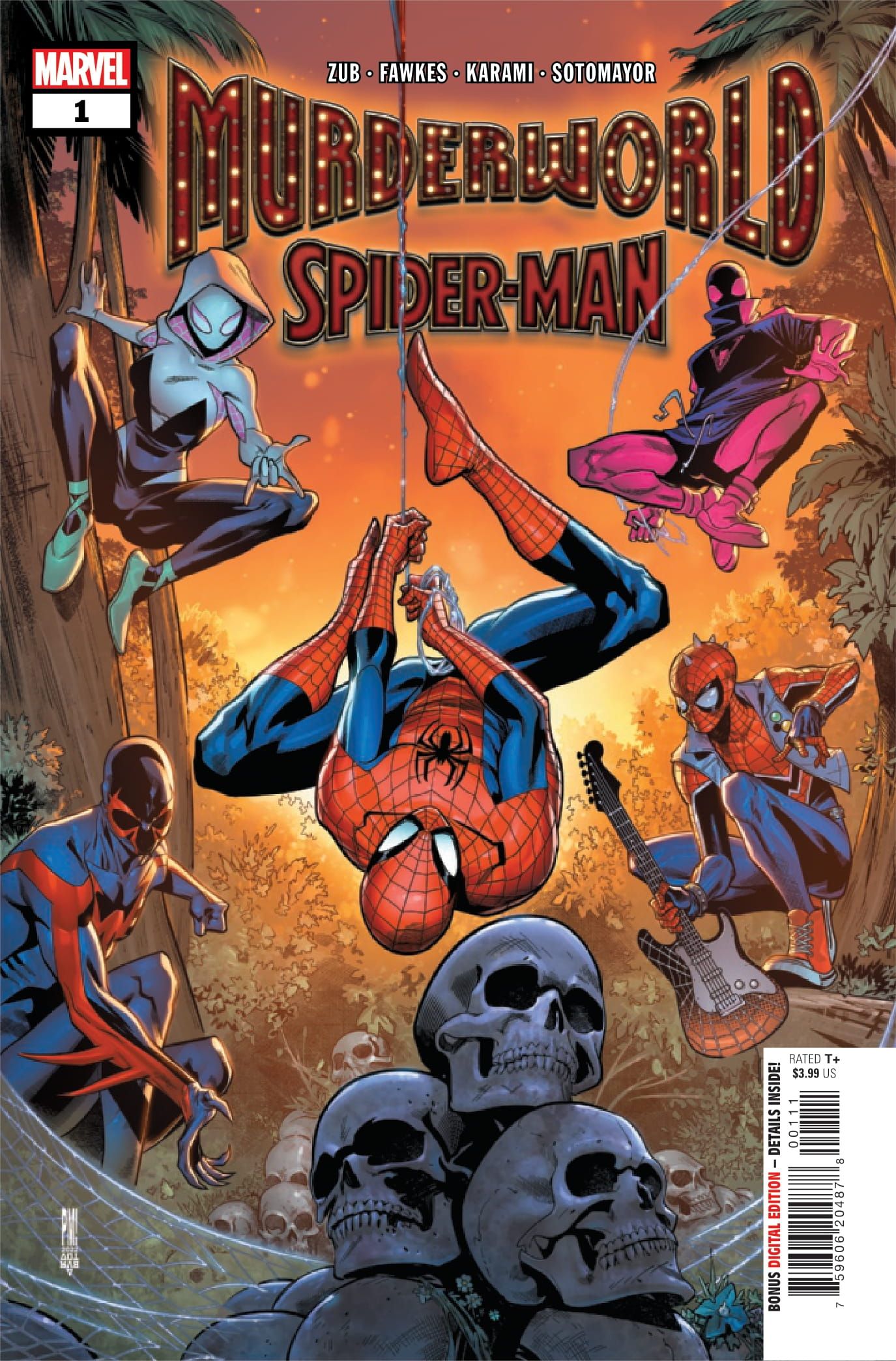 Zub & Fawkes’ Murderworld saga continues: with almost half the contestants dead, the competition for the grand prize is only just beginning!

Following the events of last month’s Murderworld: Avengers #1, Murderworld: Spider-Man #1 has arrived in all its gory glory, with writing duo Ray Fawkes and Jim Zub at the helm. Artist Farid Karami and colorist Chris Sotomayor are stepping into the series, with VC’s Corey Petit resuming his work on letters. A fresh take on the 1989 X-Men special Madness in Murderworld, Fawkes and Zub have revamped “Arcade’s multi-million-dollar complex, designed to look like everyone’s fondest fantasy of a fun-world,” into an all-or-nothing battle to the death.

Murderworld: Spider-Man #1 picks up where the Avengers title left off, with the first big chunk of contestants permanently eliminated. As the next part of the competition opens up, the 110 remaining competitors are left to pick through wild jungles, unaware that they are sitting ducks for the next batch of Arcade’s clones: every single Spider-Iteration he could get his hands on. After some wholesale slaughter, the participants get what seems like a break. But the next feature of the game is even more dangerous. Elsewhere, Black Widow follows the Murderworld trail, waiting for Arcade to slip up and reveal his location.

RELATED: Arcade Plays With the Marvel Universe in Zub and Fawkes’ Murderworld

Fawkes and Zub’s reinvention of Murderworld as a Battle Royale where only one winner leaves with a huge cash prize isn’t a novel idea, but it’s a fun departure that allows them to take some really big swings as writers. In devising their own non-hero characters that won’t affect canon, Murderworld: Spider-Man #1 poses real jeopardy to its cast and elevates itself in terms of tension and stakes. Fawkes and Zub have done some really efficient work developing their characters and allowing them to feel fleshed-out and authentic in just a handful of pages. The current focal character Eden is a really compelling protagonist. The moments of levity the duo include, particularly some meta-comedy from Arcade, break up the intensity of the comic and land really nicely. The conclusion of Murderworld: Spider-Man #1 is exceptionally well executed and poses countless interesting questions for the next issue.

Karami’s art is impressive throughout Murderworld: Spider-Man #1, showing off his terrific ability to depict tense interpersonal moments and high-octane slaughter. Karami’s style really shines in his characters’ expressions, which are incredibly animated and emotive. He uses hatching and texture to tease out subtle nuance and make bold statements. His character design is very dynamic and well-considered, which comes to fruition in the brilliant final full-page spread.

Sotomayor’s colors help distinguish different locales within Murderworld: Spider-Man #1. Although the colors don’t invest a huge amount of visual interest into the art, the contrast between each panel demonstrates an impressive understanding of light and perspective. Petit’s letters are solid throughout, delivering some interesting sound effects and providing some nice rhythm and stress to the dialogue with italicization and emboldening. Petit’s efforts give characters their own distinctive speech patterns and help the comedic beats flourish.

Despite being the second issue of the miniseries, Murderworld: Spider-Man #1 still feels like exposition, teeing up the rest of the series to be a nexus of intrigue and violence. That being said, this issue serves up a riotous continuation to the Murderworld saga, which continues to up the ante and introduces some interesting characters. The inclusion of a wider plot involving Black Widow is promising and might lead to answers to some of the elusive questions surrounding Murderworld.