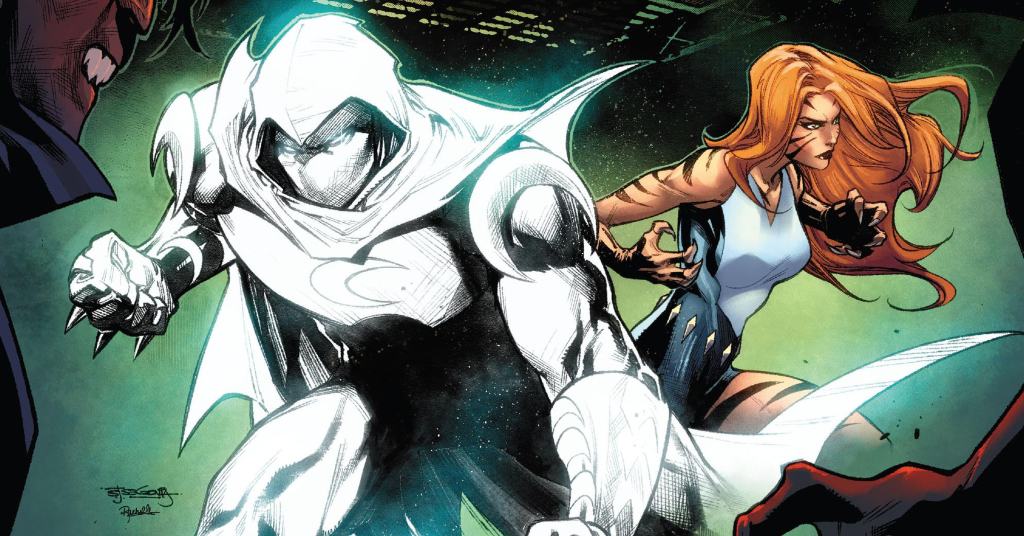 Moon Knight #18 – written by Jed MacKay with art by Federico Sabbatini, colors from Rachelle Rosenberg, and letters by VC’s Cory Petit – brings the current fight between Tutor and his vampire pyramid scheme and Moon Knight’s Midnight Mission to a close. Picking up at the conclave of the bloodsuckers, Moon Knight makes his move in dismantling the operation with Tigra. The two receive back-up in the form of Reese and Soldier breaking into the building’s systems, and the return of a thought-dead ally.

Using an ingenious bit of Moon Knight lore, the group can wipe out the clan of vampires and send a message that New York is under the protection of the Fist of Khonshu and his mission. The fight is quick and only a single representative from the conclave survives. The issue comes to a close with a tease at the return of a previous villain, playing on the split focus the series has employed throughout its run.

MacKay’s script for this issue does a great job capping off the Tutor plot, with an effortless approach to dismantling the pyramid scheme. After the more drawn-out and overwhelming fights with Grand Mal and Mean in previous issues, it’s refreshing to see Moon Knight and company clear out the top-heavy structure of Tutor’s enterprise. MacKay’s voice for Mr. Knight and the other personalities of Marc helps to bolster the issue with its lack of action, letting his grandstanding carry the book until their plan is ready to go.

The execution of the plan is also a great showcase of MacKay’s grip on the character, pulling the priestly aspect of the Fist of Khonshu role to consecrate the sprinkler water. The move gives the team a leg up on the vampires and paired with Tigra’s silver-tipped claws makes the fight like cutting through butter. The tension and interplay between the characters drive the plot forward rather than the over-the-top action of previous issues, and MacKay ensures that every word on the page moves the story forward.

The shift in focus from heavy action to a more character-driven plot benefits from the rotation of Alessandro Cappuccio to Sabbatini. Cappuccio’s work in the last few issues has brought a new dimension to the action and emotion that Moon Knight can evoke in his foes, so seeing the art style shift to a less kinetic one is an interesting decision. While Sabbatini doesn’t capture the same frantic energy of the last few issues, it makes up for it in the more dialogue-heavy and emotional sequences.

Reese and Soldier’s conversation before the sprinkle plan is a standout moment, with Sabbatini’s linework and shading playing up the regret and confidence of the former Hydra agent. The two pages, bolstered by a deep blue that Rosenberg employs to great effect, give a melancholy in its linework, focusing on facial expressions and Reese’s reaction, putting the character in frame rather than the actions to tee up Moon Knight’s plan. Sabbatini’s decision to do this conveys that sense of character first, and action second, giving the issue an edge that sets it apart from Cappuccio’s work.

Just because Sabbatini’s linework thrives with the quieter moments, doesn’t mean the action in the issue isn’t well rendered. Once the sprinklers become a delivery system for holy water, the art shifts, and new energy is infused into the linework. Sabbatini bridges these modes with an excellent full-page image of Mr. Knight and Tigra under an umbrella as the water spews, and the vamps shrug off the sprinklers. After Moon Knight says his prayer, the art and paneling explode into a more action-focused layout, and Rosenberg’s coloring adds the orange/yellows of flaming vampires to break up the heavy blues.

The falling water creates a visual accent to the sequence that feeds into the action, using varying lines to convey the movement of the falling water. That linework bolsters the fighting and the breaking into smaller, more concise panels works in step to speed up the flow of the battle. Rosenberg’s coloring accentuates the water lines and uses the flames of the dying vampires to contrast the typical palette of blues and greens. For a few panels, the background shifts to muted reds and a darker orange, which don’t contain the flaring color effect that the blue and whites do. That simpler background enhances the action inside the panels, before returning to the more grandstanding expression through the blue and white palette.