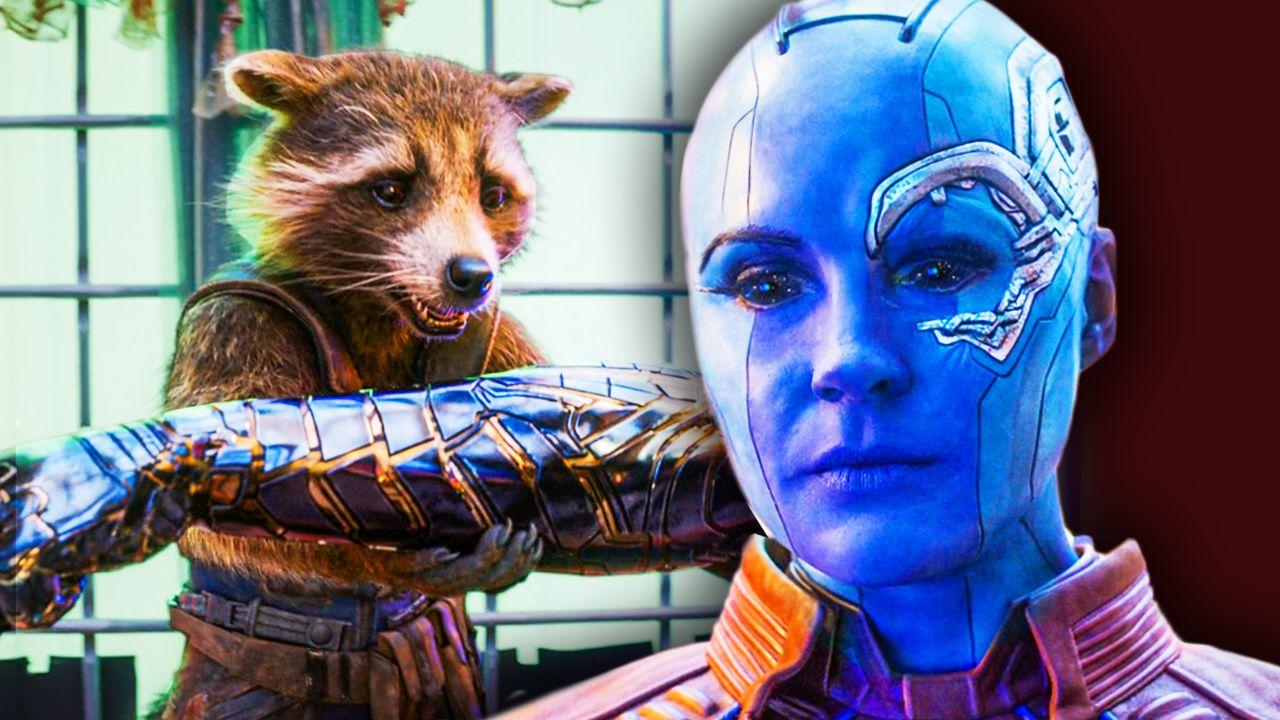 After years of wanting to get his hands on the Winter Soldier’s vibranium arm, Rocket Raccoon’s wish may have finally come true in his latest MCU appearance thanks to Nebula.

In Avengers: Infinity War, Rocket famously asked Bucky Barnes how much money he would take to give away his vibranium arm, adding to a hilarious gag that started with Rocket as early as 2014’s Guardians of the Galaxy. And while the two heroes only had that small moment with one another in one of the MCU’s biggest crossover events to date, Rocket is about to make an exciting comeback in his Marvel journey.

Warning – the rest of this article contains spoilers for The Guardians of the Galaxy Holiday Special.

The Guardians of the Galaxy Holiday Special sent Mantis and Drax on a quest to find the perfect Christmas gift for Chris Pratt’s Star-Lord, which they decided would be one of Peter Quill’s heroes in Kevin Bacon.

But while these two were off on their own quest to find the Footloose and Tremors star, Nebula found her own gift for another teammate that brought back some hilarious Infinity Saga memories.

In The Guardians of the Galaxy Holiday Special, Nebula took part in the gift exchange at the very end of the story alongside the rest of the Guardians on Knowhere. She even had a special gift for Rocket Raccoon, as she gave him a box that contained Bucky Barnes’ Vibranium left arm, which has become a staple for his character over the past eight years.

The gift meant the world to Rocket as he celebrated Christmas for the first time on screen with Nebula, even with the daughter of Thanos remaining as terrifying and dry as ever through the special. But the real question – how in the world did she steal Bucky’s arm from right under his nose? Here are the most likely theories.

How Did Nebula Pull Off the Arm Heist?

While Nebula didn’t make her first on-screen journey to Earth until Avengers: Endgame, there is the entire five-year gap that took place during The Blip along with the time after it to consider. Bucky was snapped away during this time, so there’s no way she could have performed this act until after the Winter Soldier’s return.

Once she helped complete the Time Heist to defeat Thanos before fighting with the Guardians and Thor in Thor: Love and Thunder, her slate is completely open.

Karen Gillan’s antihero developed at least a working relationship with the Avengers with the regular group calls shown in Endgame, which put her in touch with Black Widow, Captain Marvel, War Machine, Okoye, and her Guardians teammate Rocket. But on top of likely learning about Earth’s fallen heroes during her time joining those meetings, she almost certainly formed relationships with some of her Time Heist cohorts as well.

The best bet, in this case, would be if Nebula got some inside information from Chris Evans’ Steve Rogers, one of the Avengers’ biggest driving forces as well as Bucky Barnes’ closest friend. Perhaps she learned about Bucky’s arm from the Avengers’ leader and used that to steal Bucky’s arm during his travels around the world, which almost certainly would have been after the events of The Falcon and the Winter Soldier.

This raises the question as to whether this will be addressed in the upcoming Thunderbolts; will the movie start out with Bucky waking up to a missing arm? Or perhaps the Winter Soldier has a closet full of spares, courtesy of the Wakandans?

The possibility of Rocket’s gift being the real deal or not opens up a whole other assortment of questions. Could Nebula have simply obtained a replica of Bucky’s arm, perhaps one of the aforementioned, hypothetical spares?

Bucky does seem to be sporting the very same arm that he’s had since Infinity War in concept art for Thunderbolts. Therefore, another theory could be that Nebula may have just snatched a good copy. Alternatively, Thunderbolts does have the small potential of taking place before the Holiday Special, so Bucky may have retired his metal limb for a new one at some point in the movie, allowing Nebula to perform the heist.

No matter when or how this happened, this makes for a couple of interesting and hilarious stories to pay attention to moving forward. Fans will now have to find out if Bucky Barnes has a spare arm in Thunderbolts and what Rocket will actually do with this arm now that he finally has it

The Guardians of the Galaxy Holiday Special is now streaming on Disney+.