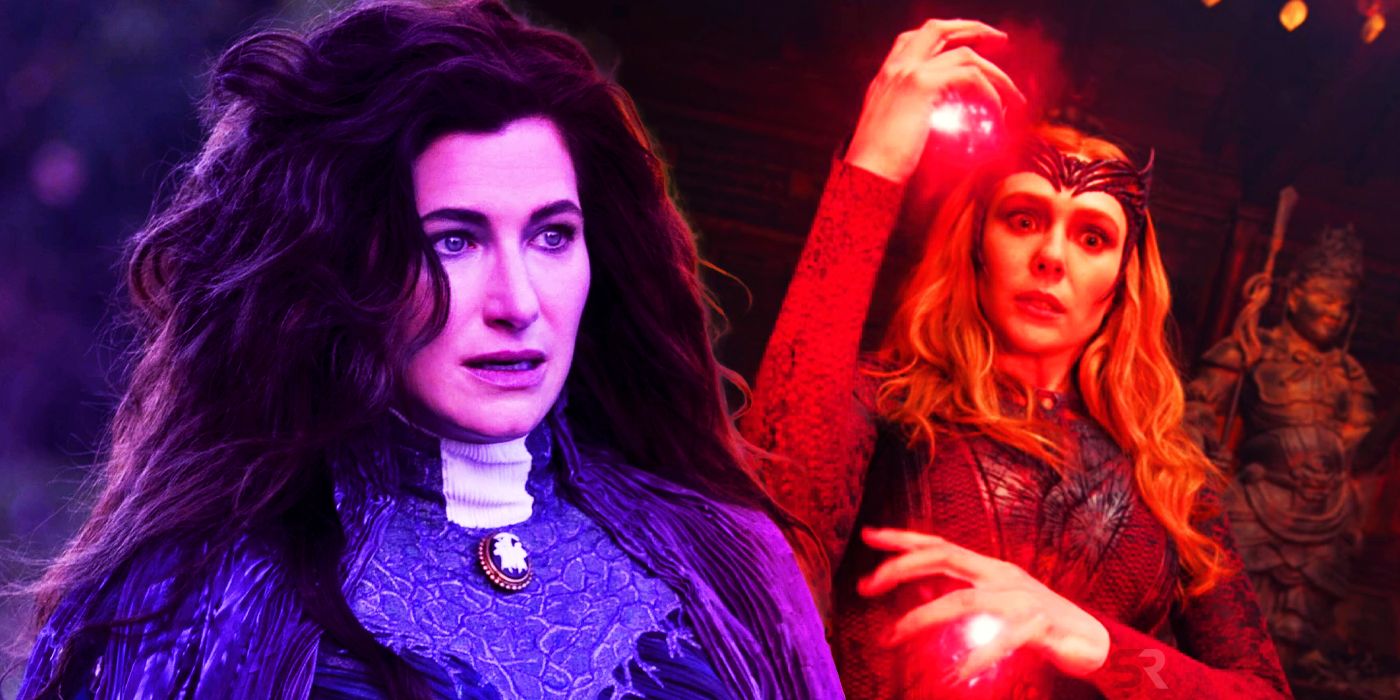 The MCU’s Phase 5 will see Agatha Harkness break free from the Scarlet Witch’s spell, which could start several new storylines for the MCU’s future.

Agatha Harkness will break free from the Scarlet Witch’s spell during her upcoming WandaVision spinoff, Agatha: Coven of Chaos, with one theory suggesting that this could make the Phase 5 series very important to the MCU’s future. WandaVision saw the debut of Kathryn Hahn as the MCU’s Agatha Harkness, one of the original Salem witches, who has a strong desire to obtain Wanda Maximoff’s power as the Scarlet Witch. While WandaVision ended with Wanda placing a spell on Agatha and trapping her within her “Agnes” persona, the upcoming Disney+ series, Agatha: Coven of Chaos, is set to release the powerful witch.

It’s been speculated that Coven of Chaos will see a new coven of witches rise up in the MCU. Confirmed actors for the series include Aubrey Plaza, Ali Ahn, Maria Dizzia, and Sasheer Zamata, who are all rumored to be taking on the roles of some of Marvel’s most iconic witches. However, this raises the question of why Agatha would want to start her very own coven, especially since WandaVision revealed that she murdered her original coven and her mother to gain more power for herself. One theory from Reddit might have found the answer, and it could be pivotal to the future of the MCU.

Agatha Could Resurrect The Scarlet Witch In Coven Of Chaos

The theory suggests that once freed from her imprisonment as Agnes, Agatha could form a coven of some of the most powerful witches in the MCU to search for and resurrect the Scarlet Witch. After the events of WandaVision, Wanda Maximoff found herself on a descent into darkness, using the Darkhold to explore the multiverse on a hunt for her children, Billy and Tommy. This led directly to Doctor Strange in the Multiverse of Madness, which, after a tumultuous journey to another reality in the multiverse, ended with the Scarlet Witch sacrificing herself to destroy Mount Wundagore and every copy of the Darkhold throughout the multiverse.

Despite her apparent death, many believe that this isn’t the end of the Scarlet Witch’s story in the MCU, with Elizabeth Olsen herself even stating that she feels the next step for the character will be a true redemption arc. There are several places where the Scarlet Witch can reappear in the MCU’s future, but there might be no better place than a spinoff from her solo series, WandaVision. Perhaps Agatha isn’t strong enough to resurrect the Scarlet Witch by herself, which would explain why she would employ the help of several other powerful witches in Coven of Chaos.

Which Marvel Witches Could Agatha Seek Help From?

There are many witches and warlocks from Marvel Comics who could make their live-action debuts in Agatha: Coven of Chaos alongside Agatha Harkness and the Scarlet Witch. Obvious character choices would be in the appearance of Nicholas Scratch, Agatha’s son, and the reintroduction of Wanda Maximoff’s children, Billy and Tommy, with many speculating that Heartstopper star Joe Locke could have been cast as Billy Kaplan, the reincarnation of Billy Maximoff. However, some more obscure choices could make Coven of Chaos an incredibly diverse and thrilling series.

The slow introduction of mutants into the MCU could be building up to the reveal of Selene during Coven of Chaos, a remarkably powerful mutant whose long life has allowed her to master sorcery. Black Panther: Wakanda Forever introduced Haiti as an important location in the MCU, which could be teasing the debut of Brother Voodoo and Calypso Ezili, two Haitian practitioners of Voodoo magic who could make their way to Westview for Coven of Chaos. The series could also see the formation of “the Witches,” a trio consisting of Jennifer Kale, Satana Hellstrom, and Topaz, who were brought together to protect the world from mystical threats.

How Can Coven Of Chaos Set Up The MCU’s Young Avengers?

Not only does the Reddit theory speculate that the Scarlet Witch will return in Agatha: Coven of Chaos, but also that Billy Kaplan will play a major role in the series. On her search for the Scarlet Witch, Agatha could come across Billy, the reincarnation of her son, and reveal his true nature to the young hero, perhaps hoping for his help in recovering the Scarlet Witch. Through this chain of events, Billy might embark on a storyline from the 2010 to 2012 Marvel Comics miniseries, Avengers: The Children’s Crusade, which features the reincarnated children of the Scarlet Witch looking for their mother with the help of the Young Avengers.

Marvel Studios have been hinting at a team-up of the Young Avengers for several years, particularly in Phase 4 projects which have introduced many legacy heroes of the original Avengers. Billy Kaplan’s presence in Coven of Chaos could be the catalyst that finally brings the Young Avengers together and sets them on a mission to find the Scarlet Witch, perhaps even introducing the MCU’s Magneto since he plays a large part in the comics’ storyline. If this theory comes to fruition, Agatha: Coven of Chaos could be one of Phase 5’s most important projects, setting up MCU stories for years to come.

More: Who Aubrey Plaza Is Playing In The MCU – Every Theory