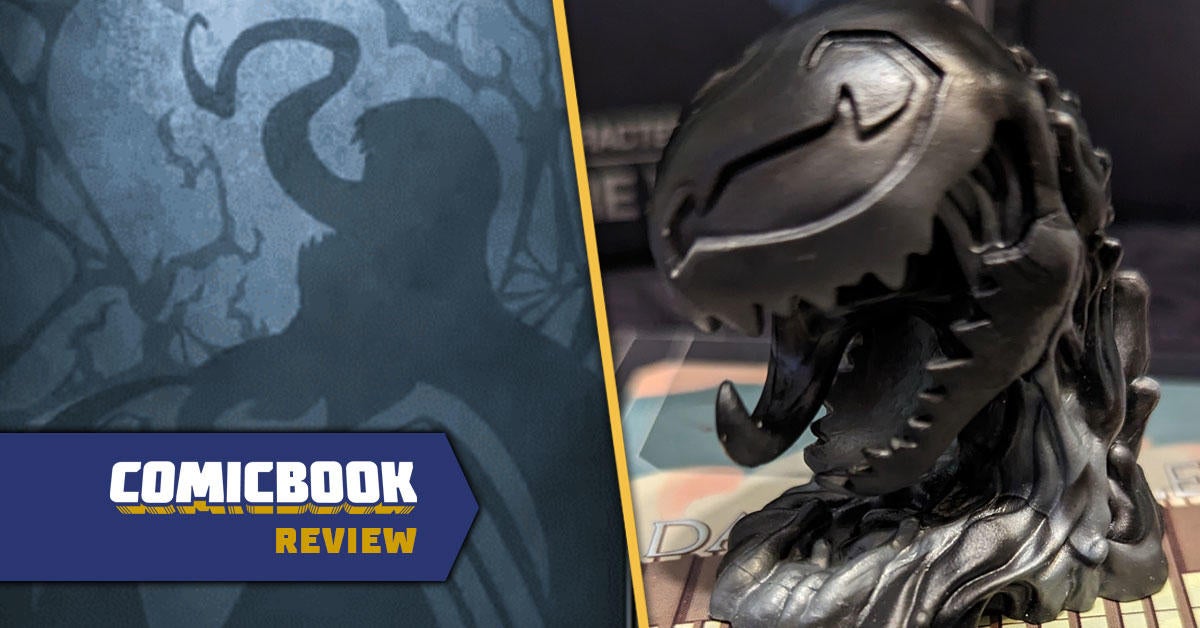 The latest addition to Ravensburger’s Marvel Villainous series is none other than Venom, but unlike previous expansions in the Disney Villainous series, this is a single-character expansion. As with all the villains in the series, Venom has his own unique objective to fulfill, and while at first glance it might seem a bit on the simpler side, it proves far more challenging to achieve, and ultimately feels satisfying when you’re able to complete it. The addition of more Spider-Man family heroes to the game is also welcome, and the miniature itself looks fantastic. Coupled with the price point, Venom is an easy addition to recommend to your next game of Villainous.

Venom’s objective is obviously tied to Spider-Man, and it involves wearing the one and only Spider-Man down using Symbiote Tokens. The tokens are double-sided and when flipped on the Symbiote side take 1 strength away from a Spider-character. When flipped on the Spider-Man side they add 1 strength to Spidey, and various cards allow you to flip or place tokens to your benefit while other Hero cards and Fate cards flip them or remove them from Spider-Man and his friends.

The goal is to wear down Spider-Man to 0 strength using only Symbiote Tokens, and while straightforward, it is harder to do thanks to the expansion’s new Fate cards. Cards like Mary Jane can disrupt your momentum by moving a hero to another domain and then also relocating all Spider-Man heroes from every domain to that location, which happened to me and caused complete chaos in my strategy for a few rounds.

Meanwhile, the Maximum Carnage Event will completely stop you in your tracks until it’s dealt with (while it is active you can’t place any Symbiote Tokens). That is made more challenging when its already higher strength of 5 is quickly boosted if you’ve already placed Symbiote Tokens on allies, as it then gains plus 1 strength for every character with a Token on them when played. Things can go from 5 to 8, or higher, in no time, and you’ll need to adapt and get rid of it to take care of your goal.

As for the Spider-Men themselves, Scarlet Spider helps Peter out by being able to take on up to four Venom Symbiote Tokens from Spidey onto himself, and Symbiote Suit can flip a Venom side Token to a Spider-Man side, and there are 3 of those throughout the Fate Deck.

The Symbiote Tokens also have another key benefit for Venom, which I always tried to take full advantage of. If you have a Venom Symbiote Token on an Ally (like Scream, Riot, or Agony, just to name a few), it allows you to just remove the Token if they are used in a battle instead of sending them to the Discard pile, and you can stack multiple Tokens as well. Coupled with Specialty cards like Merging, this is a key part of your strategy and allows you to always be working towards something that benefits you in the long run even if you can’t address your main goal on any given turn.

I will say that it wasn’t immediately super clear what effect Spider-Man symbol Symbiote Tokens had on cards outside of Spider-Man himself, and that section in the rules could use some fine-tuning. Also not having an Anti-Venom card in this set seems like an odd omission, though that might be saved for an expansion that includes Carnage in the lineup. In the end, this is just a notable omission, as the other characters included all feel right at home.

Marvel Villainous’ We Are Venom Expansion boasts everything you’ve come to love from the game, including gorgeous artwork, an unmistakable unique miniature, and a completely new way to experience an already addictive game. Venom feels like his own character and it’s wonderful to see more of the Spider-Man universe brought into the game. We Are Venom is a must-play for fans of the character, but even if you aren’t, there’s still plenty here to make your next game an entertaining experience.

The Marvel Villainous: We Are Venom Expansion is in stores now.

Review copy provided by the publisher