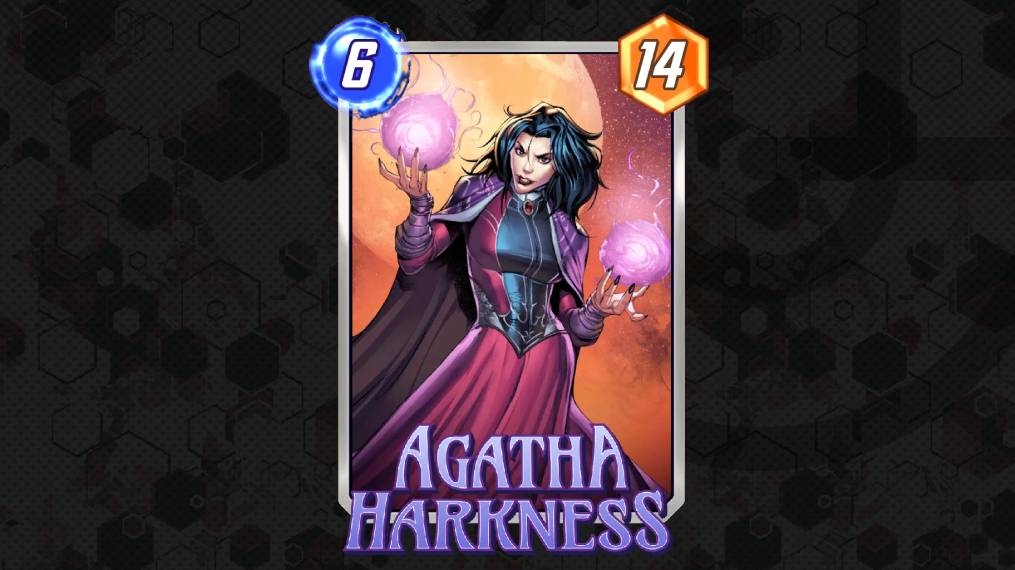 One card in Marvel Snap’s expansive roster of Marvel Heroes has been itching the back of my brain. It’s a card with really counterintuitive design, but it also might be the kind of mechanic that other games with deckbuilding systems could borrow from.

That card is Agatha Harkness—a surprisingly self-aware witch with an incredible power: she always starts in the player’s hand, and she decides what cards you play on each turn. She’s got a hefty chunk of power (14, a great value on a 6-energy card), but she takes away of ton of player agency.

Denying the player choices on what card to play each turn can sting at first (especially when some card like Agent 13 or Nick Fury unceremoniously dumps her in your hand by surprise). But adding Agatha to your deck can be a surprisingly smart move—and it invites players to think about their decks in totally different ways.

The depths of deckbuilding

Deckbuilding mechanics in games owe plenty to the collectible card game genre. Wizards of the Coast has turned the experience into a financial windfall with Magic: The Gathering, and plenty of video games have taken inspiration from the experience of building terrifically obnoxious blue/black decks (or red/green, straight black, etc. etc.)

Deckbuilding is weirdly enough, kind of like programming. Once players can piece together how different deck elements interact with each other, they stop just trying to play the most powerful cards and focus on setting up strategies they can reliably execute with every round of play. Those strategies aren’t built just on powerful cards or well-known characters, but complex if-then logic that may involve a bit of math or random number generation.

In Magic, you might set up a greased chute that sends all your powerful cards into the graveyard, then summon them back into the match for a massive damage spike. In Slay the Spire, you might build a deck that lets you build tons of protective armor that can then be unleashed as an attack.

And in Marvel Snap, you might build a deck where you’re trying to move cards around the field—building up to a grand finale where you slam all your cards to the left, granting a massive end-of-game power spike.

All these different decks are built on the idea of player choice—but like I said earlier, Agatha takes away that choice. What gives? Why is she good?

Why Agatha Harkness is a hidden threat.

It’s always good to look on the bright side of things. Why think of Agatha as a choice-killer? After all, she’s just here to do what the players would have done—her main downside is just that she doesn’t place cards in the most brutally optimal way. She shrugs off the effects of locations and doesn’t consider the same synergies a human would.

So what is Agatha good for? Well if a deck is just a program that the player is executing—why not turn Agatha into an extension of that program?

This thought came to me after I found the card “Hela.” The Viking goddess costs six energy and has a great, synergistic power: she takes all discarded cards and plays them randomly on the game board.

And Marvel Snap has plenty of cards that discard cards from your hand. Blade, Colleen Wing, Lady Sif, Sword Master, and Moon Night can all tee up Hela’s ability. You’d normally maximize this power by loading your deck up with those basic discard cards and then fill it with powerful high-end cards that would make a big splash when Hela hits the field.

Oh, and look—Agatha is one of those high-end cards. And every time she takes control of your hand to play those lower-end heroes, she runs the risk of being discarded herself. Once she’s out of your hand, players regain control of the game, and can fine-tune further card deployment for Hela’s arrival.

It’s a risky gambit, but playing a few rounds with it shone a light on the task of deckbuilding—can you program a deck so chaotic, that Agatha’s dumb chaos could actually exploit it?

Agatha’s not just for discards

There are definitely easier ways to test decks in Marvel Snap that don’t involve putting a literal agent of chaos in the center of your strategy. But once you do start embracing that chaos, you get the real value of seeing her randomness in action.

Part of the reason the discard strategy works for Agatha is that it turns her chaotic behavior back against her. She’s like a runaway lawnmower buzzing through your deck, and you can stop her by throwing a land mine out in your yard (it’s a barely functional metaphor).

In the greater design space of Marvel Snap, there will be more land mines players can exploit. Right now you could make the most of her chaos by adding cards like the aforementioned Agent 13, or her apprentice The Scarlet Witch. If a random deck exploits every random card in the game, can your opponent predict what you will do?

I expect that in the long arc of Marvel Snap’s lifespan (which I personally hope goes for at least a decade), Agatha Harkness will at some point be “a big problem.” If the right combination of chaotic cards enters the player pool, she’ll be able to reliably disrupt the general player experience.

I don’t know if that would make her a “top tier” card, but she could be a solid gatekeeper, brutally crushing players and pinning them down at lower ranks.

If she does, that’s fine! She’ll have served her purpose—showing players the value of building a deck so simple even a bot could win with it. Second Dinner’s already shown a willingness to nerf cards that are a bit too efficient for their value, and a brief reign of Agatha would be, if nothing else, thematic for a Marvel game.

It’s a unique deck quirk that can only manifest in a video game like Marvel Snap. To make silly synergies work in a game like Magic: The Gathering, players need to assemble decks and then read out lines of text that are sometimes entire paragraphs. Just by tossing in a powerful AI card that makes random choices, Marvel Snap can help players consider the fine art of synergy by challenging them to think of their deck as a simple program—and checking if there are programs so simple even Agatha could execute them.

She’s a card that merits a tip of the hat for developer Second Dinner—though I have to say, I wish she didn’t hog all the boosters at the end of each round.

Yes, I know you and Senor Scratchy will dine well tonight Agatha. We’ve been over this like 50 times.