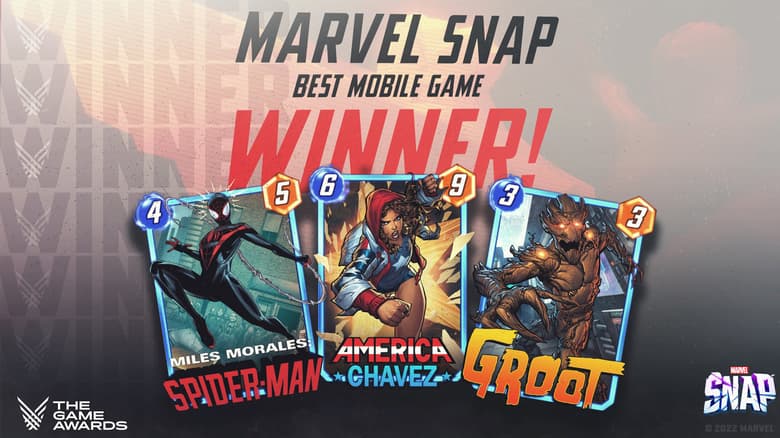 Congrats are in order because MARVEL SNAP — the recently launched superpowered card battler — has won Best Mobile Game of the Year at The Game Awards for 2022!

The game, from Nuverse, Second Dinner, and Marvel Entertainment, lets players from over the world can finally experience the adrenaline-pumping, superpowered card battler game that lets fans assemble a Marvel dream team of heroes and villains, before battling their way through the multiverse to glory—all in just three-minute play battles.

MARVEL SNAP gives players the unprecedented ability to summon and unleash more than 1000 cards at launch, featuring many fan-favorite heroes and villains in the Marvel universe. The game brings together stunning art from Marvel’s rich 80-year history with beautiful, new original illustrations from many of the world’s most creative artists. Developed by Second Dinner, a team of creators behind some of the world’s best card games, MARVEL SNAP is super easy to pick up, but will take a lifetime for even the best players to master.

MARVEL SNAP is available in 13 languages across the world and available for download now on mobile and early access PC: www.MarvelSnap.com.