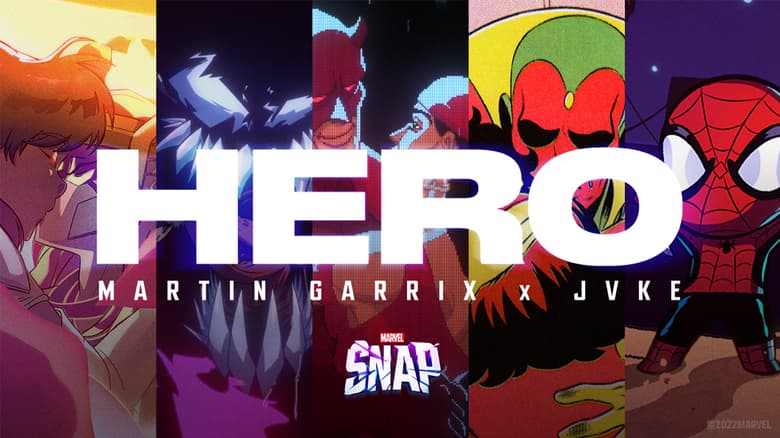 MARVEL SNAP launched in October to critical acclaim, and quickly became one of the year’s top downloaded and highest rated  games in the world. The adrenaline-pumping, superpowered card battler game lets fans assemble a Marvel dream team of heroes and villains before battling their way through the multiverse to glory—all in just three-minute play battles.

“To celebrate how much players have loved playing MARVEL SNAP over the last few months, we wanted to create a special tribute video for them,” said Melanie McCracken, Brand Lead at MARVEL SNAP (Nuverse). “This collaboration brought together superstar talent like Martin Garrix and JVKE and top creatives from across MARVEL to create an epic video about love, and we couldn’t be more excited to finally share it with fans.”

Starting today, MARVEL SNAP will host a massive in-game “Hero” event featuring special themed rewards, offers, and events. To start, all players that login to MARVEL SNAP will receive a free Storm Hero variant card, illustrated by the original concept artist that worked on the Black Panther and Storm character designs for the Hero music video, Jander González Mella. After the one-week free login reward window, the Storm Hero Variant card will be added to the Token Shop as an Ultimate Variant. MARVEL SNAP also launched a limited time ‘Hero’ variant bundle, available for purchase in-game now, which includes variants of many of the characters featured in the music video.

“It was so cool to collaborate with Martin Garrix, JVKE, Second Dinner, Nuverse and The Line Animation to express our collective fandom by diving deep into Marvel history and pack the ‘Hero’ video with fun Easter Eggs,” said Bill Rosemann, VP & Creative Director, Marvel Games. “Martin and JVKE’s song perfectly evokes Marvel’s rich tradition of dramatic romance, while the stylish and authentic range of art in the video’s vignettes likewise celebrates the many art styles that players have come to love in Marvel SNAP.”

The immersive music video was crafted by the award-winning London-based animation studio, The Line Animation. The video will be shown at tonight’s The Game Awards, where MARVEL SNAP is nominated for the Best Mobile Game award.

Get in on the action now! MARVEL SNAP is available in 13 languages across the world and available for download now on mobile and early access PC: www.MarvelSnap.com.