There are a lot of comics out there, but some stand out head and shoulders above the pack. With “Don’t Miss This,” we want to spotlight those series we think need to be on your pull list. This week, we’re spotlighting “Immortal X-Men.” “Immortal X-Men” is focused on establishing the political ramifications of Krakoa’s Quiet Council that governs the Nation-State. “Immortal X-Men” has covered a wide variety of topics focusing on who fill a new council seat on the Quiet Council to fighting off the Eternal forces in Judgment Day. Today we are going to dive deep into Marvel’s “Immortal X-Men” title to explain why you can’t Miss this wonderful X-Men book!

“Immortal X-Men” is written by Kieron Gillen. Gillen has a long history with Marvel Comics stretching way back to 2008 with artists Greg Scott and Kody Chamberlain “Newuniversal: 1959” #1. Following this issue Gillen began working on the first steps of his debut X-Men run with “X-Men: Manifest Destiny” #5 alongside writers Frank Tieri, Mike Carey and artists Sara Pichelli, Michael Ryan and Ben Oliver. Following a couple of X-Men issues, Gillen began working in Marvel’s Thor Universe with “Beta Ray Bill: Godhunter” with artist Kano. Gillen also worked on a short-lived “S.W.O.R.D.” comic with artists Jamie Mckelvie and Steven Sanders. Following the work on this title, Gillen kept returning to characters like “Thor” with artist Billy Tan and the X-Men with issue #532 of “Uncanny X-Men” that he wrote alongside writer Matt Fraction and artist Greg Land.

Lucas Werneck is a newer creator over at Marvel. Werneck’s first work at Marvel is credited as “Amazing Mary Jane” #3 published in 2019 by writer Leah Williams and artist Carlos Gomez. Werneck joined Krakoa quickly by writing the 4th issue of Marvel’s “Marauders” written by Gerry Duggan. Werneck continued working in Krakoa by drawing some of the next issue of the series with Matteo Lolli with Duggan continuing to write the title. Werneck also briefly worked on “Captain America” #19 with Ta-Nehisi Coates, Jason Masters and Robert Quinn. After “Captain America” Werneck remained in the X-Office going on to work on titles like “Empyre: X-Men” by writers Benjamin Percy, Gerry Duggan and Leah Williams and “X-Men: The Trial of Magneto” #1 which is also written by Leach Williams and also drawn by Valerio Schiti.

What’s it all about?

“Immortal X-Men” is about a group of important mutants ruling over the Nation-State of Krakoa.

What makes it so great?

“Immortal X-Men” is great because of the incredibly sharp characterization that Gillen lends to so many different heroes throughout the series. Instead of just focusing in one character in the vast line of X-Men, Gillen opts to use a great many. Oftentimes the point of view character in the issue will switch depending on which installment you are reading. The series as a whole has taken on a great job characterizing the seemingly Immortal relationship between Destiny, a precog Mutant who can see the future and shapeshifter Raven. Gillen has not yet paid off the plot thread between the couple that he has been teasing since the debut issue of the series, but the way that he emphasizes these characters in so many locations, settings and contexts throughout the series is fascinating. The Marvel Universe as a whole has done a wonderful job characterizing Destiny ever since the landmark “Inferno” crossover.

One of my other favorite parts about “Immortal X-Men” is how the series is able to collaborate with the other titles in the X-Men line from past and present to make “Immortal X-Men” seem like it is more than the sum of its parts. “Immortal X-Men” lent some key plot points and explanations about “Judgment Day” that ended up making this title better as a whole. Marvel’s main “X-Men” series shares characters and plot beats with “Immortal X-Men” that oscillate between the titles. Gillen has continued to use Mr. Sinister in so many different contexts throughout the series, sometimes serving as an advisory role and other times serving as a villain obstructing the goals of The Quiet Council. Recently, a plot thread involving Sinister, and the main “X-Men” title has led both series to converge in a fascinating manner.

Lucas Werneck’s art in this series is fantastic. Werneck is really focused on fleshing out the expressions of the characters to match with Gillen’s nuanced scripts. Werneck draws more angular lines that allow the issue to have a more cartoonish aesthetic. At first, this switch seemed jarring due to the serious nature of Gillen’s scripts, but importantly Werneck is able to capture all the silly moments from Gillen’s writing with ease. There are so many funny moments with Mr. Sinister reacting to something in the background that another character said that is enthralling to look at on the page. Werneck is great at portraying action on the page as well. Werneck shows off movement on the page incredibly well as Sinister teases a character before getting punched. When the time calls for an important or fluent moment in the series, Werneck is able to adjust his style in order to ensure that the plot moment looks appropriate for the page.

The first couple issues of “Immortal X-Men” focus on the mutant filling the open seat in The Quiet Council led to solid political drama that spread throughout Krakoa. These first couple of issues carry a different tone than the rest of the series due to the vast changes in the plot. However, I think that Werneck and Gillen do a wonderful job switching the subject matter of the title for the most important plot beat in Krakoa at the time. 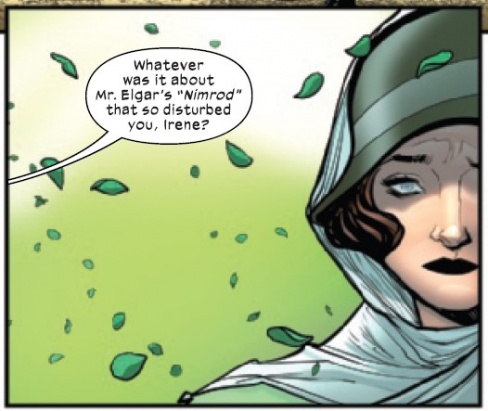 How can you read it?

You can purchase “Immortal X-Men” monthly from Marvel Comics wherever finer issues are sold. “Immortal X-Men” Vol 1 is scheduled to release on December 6. Marvel’s X-Men titles are some of my favorite in the entire line of comics. Don’t miss the sharp characterization of “Immortal X-Men” by Kieron Gillen and Lucas Werneck!