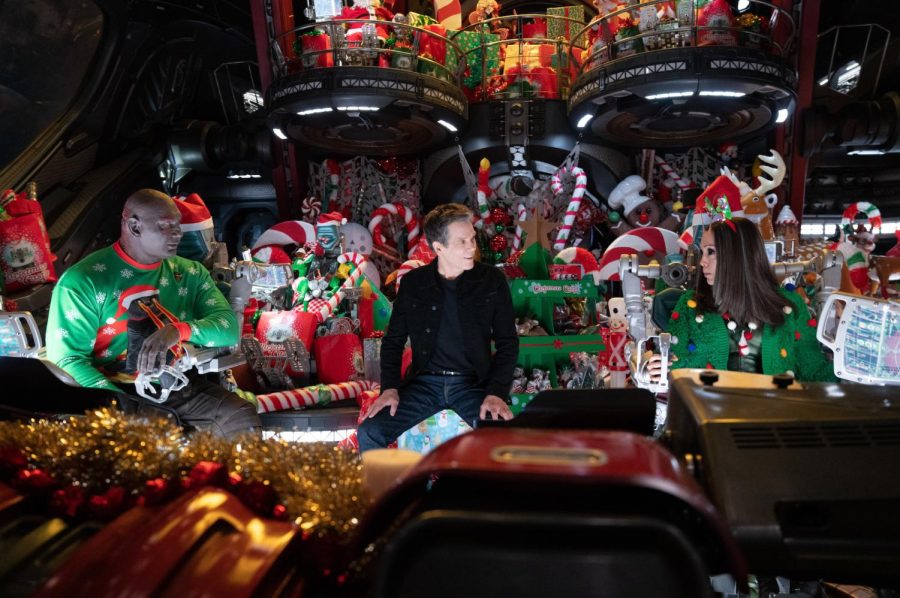 (L-R): Dave Bautista as Drax, Kevin Bacon as himself, and Pom Klementieff as Mantis in Marvel Studios’ The Guardians of the Galaxy: Holiday Special, exclusively on Disney+. Photo by Jessica Miglio. © 2022 MARVEL.

In honor of the holiday spirit, director James Gunn and Marvel Studios have given us the “perfect present,” something we definitely didn’t ask for: “The Guardians of the Galaxy: Holiday Special.”

In this special, the citizens of Knowhere are shown the true meaning of Christmas, although I don’t think anyone really knows what this means in the movie because at times it seems the writers didn’t know what they were doing when they planned this.

The story takes off when Drax and Mantis feel bad after hearing a story from Kraglin about how Yondu, played by Michael Rooker, ruined Peter’s celebration of Christmas as a child. Because of this, they decide to get Peter the perfect gift in an attempt to reignite his Christmas joy.

This plot point produces the first major issue with this special: though the story is sad, its true implications are lost on anyone who has not seen the previous two “Guardians of the Galaxy” movies. Without knowledge of those two movies and their plots, the emotional context is missing and any connection the audience has with the characters is lessened.

This moves us to the main bulk of the story: For some bizarre reason, the film’s director decided that Mantis and Drax’s “perfect gift” to Peter would be none other than famous actor Kevin Bacon. That’s right, the two guardians decide that the best way to honor their captain is to bring him one of his childhood icons, in the flesh.

While this plot choice may be confusing, it ultimately led to some of the best acting in the movie, as watching Mantis and Drax try to navigate Earth while looking for Kevin Bacon was quite comical. While it did get some chuckles out of me, I was also annoyed slightly by the over-reliance on portraying the duo as ignorant outsiders with no sense of reason. I understand that Mantis and Drax are not from Earth, but they’ve definitely seen humans before. I just think the directors could have pulled back a little on the comically stupid routine.

This being said, the rest of the actors’ performances felt wooden; especially Nebula and Rocket. Somehow even Groot, who literally only says “I am Groot,” had a better performance than them.

I completely believe that Sean Gunn’s casting in this franchise was only due to the fact that he is the director’s younger brother. I don’t know if it’s the writing or Gunn’s acting, but every time he talks I cannot take him seriously. It feels like such a disingenuous performance.

Overall, while I appreciated the musical score and visuals, it wasn’t enough to take away from the bad acting and ridiculous plot. I am greatly saddened by the outcome of this special, as I am a huge fan of the “Guardians of the Galaxy” franchise. I honestly would not recommend that anyone watch this film.

I am not discouraged, however, and I hope that “Guardians of the Galaxy Vol. 3,” set to release on May 5, 2023, will rekindle my appreciation for the film series.

Currently, the special is only available on Disney+.