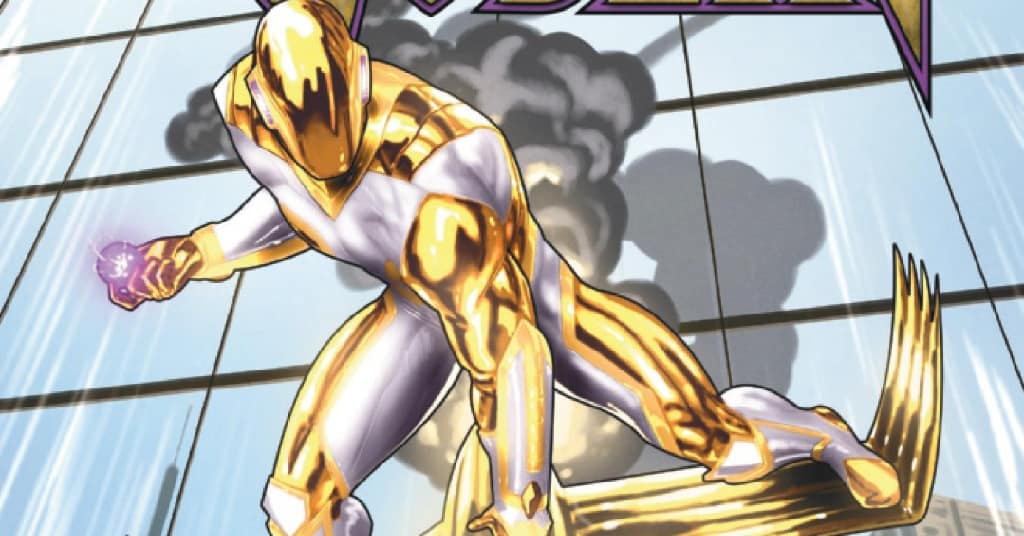 There’s an adage that the villain is the hero of their own story, and is meant to be a way to ensure depth and motivation are ascribed to the antagonist of a story. This is what makes a villain three-dimensional, moving away from a mustache-twirling cliché to something more complex and relatable. And in many cases, while this is true, the push to make villains complex will sometimes undercut their power as antagonists, mudding their relationship to the hero in a story and the larger world, in cases of expansive shared universes.

Gold Goblin #1 – written by Christopher Cantwell, with art by Lan Medina, colors by Antonio Fabela, and letters by VC’s Joe Sabino – blurs the line between villain and protagonist, focusing on Norman Osborne’s current status quo of redemption. This issue picks up after The Amazing Spider-Man #13, in which Norman was forced to put on a new suit to help defeat the multiple Hobgoblins attacking Spider-Man. Based on the white and gold costume, and the fact Norman is operating in it, the media has dubbed him the Gold Goblin, a harsh reminder of his past. It’s a point that hammers the core tension for the miniseries, in which Norman has to grapple with his past sins, including Gwen Stacy. While Norman deals with his ghosts, he tracks and battles Jack O’Lantern, who’s clearly outmatched and easily defeated by Norman.

The script for the issue is well executed and an interesting thought experiment to dig into the character of Norman Osborne, but doesn’t connect on an emotional level. In theory, the plot of Norman facing Jack O’Lantern while Norman grapples with the demons of his past should be a fascinating read, but there’s a spark or x-factor that’s missing from the story. Missing that causes the book to read like a play-by-play, even as visual and narrative beats attempt to function as emotionally resonant moments. It could be the contrivances that led Norman to this point, i.e. getting shot by a magically imbued shotgun that removed his sins, but the motivation to do good just doesn’t sit right. This version of Norman is passive in his motivation, the only reason he is here is a magical status quo change that occurred at another character’s hands.

None of this is an indictment of Cantwell’s storytelling abilities but comes from a history of Marvel’s inability to commit to true changes for long-standing characters, especially those in the Spider-Man wheelhouse. This entire era of Spider-Man reads like a gut reaction to the previous run, and Cantwell is attempting to tell a morally complex story of a man attempting to overcome their nature. It’s an excellent set-up on paper, but when put on the page, in this age of Spider-Man and Marvel, it’s difficult to not be cynical.

In a title like Amazing Spider-Man that espouses a static character that can’t grow or change, that framework attaches to the various villains and supporting cast alike, as they have to remain consistent to stay in the orbit of the titular hero. Norman will fall back to his Goblin persona sooner or later, in the same way that a romance with MJ will never stick, or Aunt May will forgive and continue to support Peter. The book, like much of the stories coming out of Marvel, is fun to read at the moment but is so encased at a specific point in time that after turning the last page, it becomes muddied and forgettable.

The issue is a triumph in terms of its art, which is filled with striking compositions and panel layouts. Medina’s ability to create striking imagery by mixing reality and fantasy is spectacular and imbued with a sense of longing and regret in every line on the page. There’s a spectacular repetitive panel composition early in the issue in which Normie is hitting baseballs as Norman experiences flashbacks to Gwen’s death. He uses a series of diagonal gutters between sharply angled panels that create a jarring comparison to the two events, and in both Normie and Gwen’s panels, obscure their faces in all but one of each panel.

It’s a powerful juxtaposition that works to highlight the highs and lows of Norman’s life, reminding that his act of being present in the moment with his grandson is built on the death of this young woman.  The use of repetition in the portrayal of Gwen occurs later on, in a jaw dropping page where Norman is weighed down by Gwen as he descends an elevator. Medina uses multiple vertical panels to show the elevator going down, zooming out from the machine and Norman until he’s all but swallowed in the darkness of what he’s done.

Later on, Gwen will haunt Norman once again, this time in a wide panel of Peter and Norman talking. Peter takes up the left third of the panel, with Norman in the center, and a falling Gwen bathed in bloody crimson in the left. Instead of focusing on the human aspect of Gwen like in the first instance, Medina illustrates the neck-snapping with a partial x-ray of Gwen’s neck. It’s a startling composition that plays like an image out of a horror title, making it anatomically clear what happened to Gwen. It’s an almost clinical image, but when paired with Fabela’s colors, makes for a gruesome bit of recollection on Norman’s part.

The action of the issue is also well rendered, balancing with the more introspective moments throughout. Medina’s use of panel layouts ensures the fight between Jack O’Lantern and Gold Goblin is concise and dynamic, utilizing staggered panels and thick linework to sell the speed and heft of the suits. Norman’s Goblin suit is all slick speed, while the Lantern is more of a brute force attack. It’s a quick fight thanks to Norman’s experience, but Medina’s art sells the comparison between the fighters. Combining Fabela’s arresting palette that makes use of the new Goblin’s color scheme in direct contrast to the orange and greens of Jack O’Lantern, the look of the book is working in its favor.