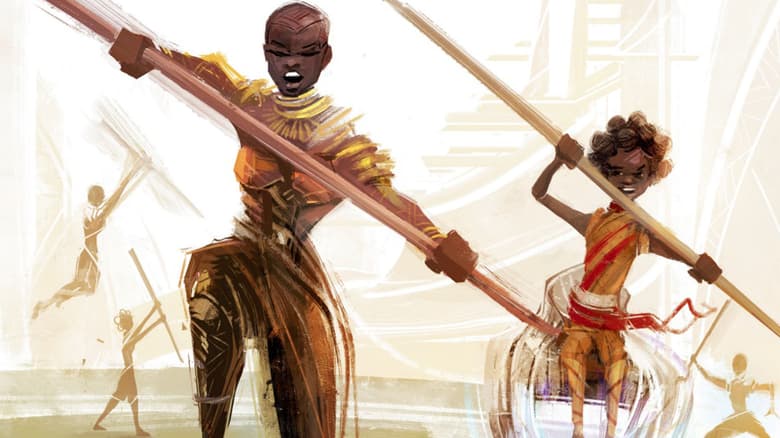 Can you tell us a bit about some of the Wakandans that Assata is going to meet in your book?

FREDERICK JOSEPH: Assata is going to meet M’Baku, she’s going to meet Shuri, she’s going to meet Queen Ramonda, and she has some very specific ties to some of the Dora Milaje. When creating Assata’s story and ultimately creating the character, the idea was to create something that helps us get a new lens into Wakanda. I think that our lens is oftentimes through the adults and what they’re all dealing with. But what does the bedroom of a young Wakandan look like? What does Wakanda University look like? So, when working on her story, I really wanted to bring us to not just places where she met people, but like the places where we meet the places. I wanted us to get a glimpse of certain things [in the world] that we otherwise haven’t.

NIKKOLAS SMITH: And I was so glad, Fred, that you went to all these places. I mean, one of the things that so many people left the theater thinking from [the first film], as the ship was flying over the Golden City, or these different parts of Wakanda, was like man, I just want to live in those spaces for a little while. And more than just flying over them, I want to see who these people are. Who are these Wakandan families? What are their daily lives, and all the things that they go through? It was really cool to be able to explore that.

How did both of you come to be involved in The Courage to Dream?

FREDERICK JOSEPH: Nikkolas, you were the first one on the project.

NIKKOLAS SMITH: Yeah, it was probably six or seven years ago—I was working at Walt Disney Imagineering, developing ideas for what would become the Avengers Campus for Disney California Adventure. And I was working on a lot of Wakanda ideas. Our campus [was] connected to Disney Publishing, so I would go over to Publishing and talk to Nachie Marsham. At the time he was one of the main editors there, and I just kept bugging [him] like, we need to do a Black Panther picture book. I basically was putting that seed into his mind every month. Long story short, [Nachie] forwarded along the idea, and years later I heard that they were trying to develop it. I think he mentioned that they were looking at some authors and Fred Joseph was potentially going to be writing it. Fred does so many amazing things with his writing, and I was like, “it’s a no-brainer, let’s do it.”

FREDERICK JOSEPH: When [I was told] that Nikkolas was working on the book, I was like, OK, cool. I’ll find the time. His artistic style is so dreamlike, and I think that was perfect for this book. Because while you absolutely are rooted in the palette and the feel of Wakanda, it’s almost like you’re sitting and imagining [with Nikkolas] as you’re flipping through the pages. It’s gorgeous. I’m so excited that people will get to see what he’s done.