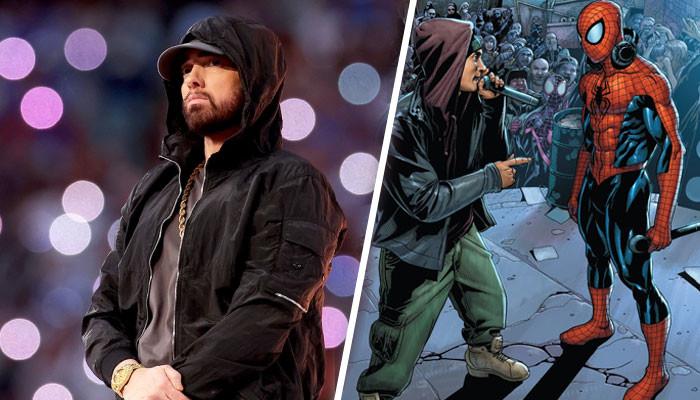 Eminem will be having a rap battle with the web-slinging Marvel hero, Spider-Man.

On Tuesday, November 22, 2022, hustl. revealed that Eminem will be joining your friendly neighbourhood Spider-Man for a limited edition comic book cover variant in celebration of the The Amazing Spider-Man #1, which was released in stores in April, via Billboard

The rapper, 50, shared the first look at the cover via Twitter and Instagram on Monday, which features him in a hooded sweatshirt rap battling against the superhero with a crowd — including Venom in the front row — engaging in the moment.

“Like Spider-Man crawlin’ upside of a wall” [spider emoji] HONORED to be on the official variant of The Amazing Spider-Man (2022)…” captioned the rapper, also adding that stans can drop for the merch on his official website.

The next day, the Rap God hitmaker announced that he would be facing off with Spider-Man, with the poster reminiscent of his 8 Mile movie iconic rap battle. “The rap battle of the century. [mic emoji] See @Eminem and Spidey face off on hustl’s new variant cover for ‘Amazing Spider-Man’ #1! Mom’s spaghetti not included,” captioned Em.

According to Marvel, the cover is created by Salvador Larroca in association with hustl..

“I’ve always been a huge Spider-Man fan since I was a kid,” Eminem shared. “He’s definitely in my top 5… So being on a cover battling Spider-Man is such a thrill and an honour.”

“It’s truly an honour to be able to bring Eminem and Spider-Man to fans slinging raps on this official Marvel variant cover. There is no doubt that fans lucky enough to find themselves holding one of these will possess a highly sought-after collectible,” added Keri Harris, hustl. COO.

Marvel announced that only 5,000 print copies are available for purchase on Eminem.com.

An additional 1,000 limited print run of the spotlight version of the original variant comic cover will be available for purchase on TheHaul.com starting Tuesday, November 29.