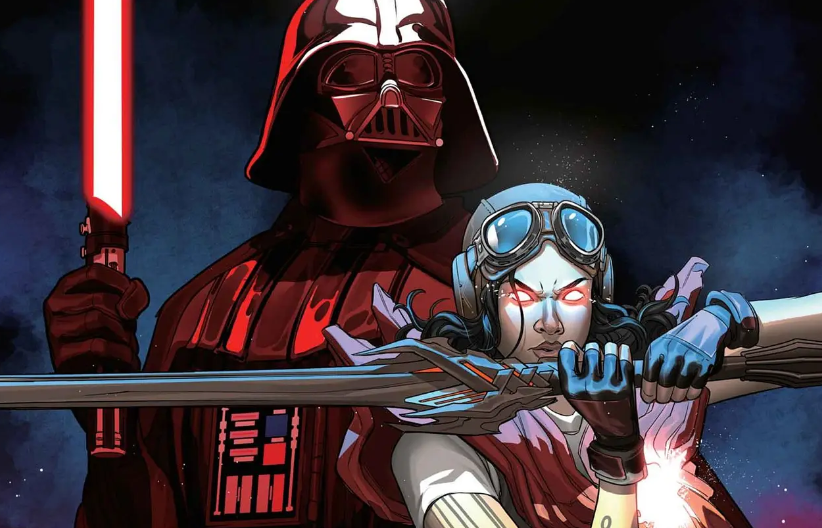 Marvel has released comic solicitations for March 2023, including upcoming Star Wars releases which see a number of spicy teases. Those include the last issue of Han Solo & Chewbacca, with a finale that has a setup for what’s being billed as the next big event in Marvel’s Star Wars. The High Republic also sees war come for Jedha in a two-issue month. Meanwhile, Doctor Aphra is at its final chapter with the Spark Eternal, but there might be a reunion with a certain dark lord to contend with. And finally, it’s Qi’ra’s last stand as Hidden Empire sprints towards its conclusion.

Check out all the covers and solicits below (courtesy of Bleeding Cool).

THE BATTLE OF JEDHA CONTINUES!
• As Tey Sirrek defends the Temple of the Kyber, Vildar Mac is buried alive, with only his belief in the Force to keep him alive.
• But Vildar is a Jedi beset by doubts, a man scarred by a past he should’ve forgotten years ago.
• Who can come to his aid as the Holy City tears itself apart? The Force is with Vildar, but is he one with the Force?

THE SIEGE OF ENLIGHTENMENT!
• Vildar, Tey and Matty are forced into a corner, with enemies closing in all around.
• But what is the secret of the hidden Jedi vault?
• And who will die in the freezing Jedha desert?

Issues #6 and #7 of Cavan Scott’s The High Republic series take place during the heart of The Battle of Jedha, an upcoming audiodrama from George Mann releasing on January 3, 2023. The last bits of High Republic storytelling before Jedha explodes are in The High Republic #3 and The Blade #1, which release on December 28.

CLOSE ENCOUNTERS!
• The Starros clan are on a collision course of a lifetime!
• What mysteries from Sana’s past are coming home to roost?
• And whose party are they about to crash?

THE ENDGAME GAMBIT APPROACHES!
The final moves of Lady Qi’ra’s great game have begun. The Sith have been summoned, and the Fermata Cage will open… For Qi’ra, it’s all or nothing.

With Hidden Empire almost at an end by this time in March, this sounds like the right time to tease what’s next. Doing it within the pages of a prequel comic that hasn’t had much connectivity to the Qi’ra saga raises some eyebrows though, especially as Marvel (eventually) approaches Return of the Jedi. For now, what ripple effects will the looming end of Hidden Empire and Han Solo & Chewbacca have on the four ongoing series as each heads into their fourth year of publication?

THE FORCE IS BROKEN?
The efforts of Lady Qi’ra and Crimson Dawn to destroy the Sith have sent deep ripples running through the Force, disrupting Luke Skywalker’s connection to the deep powers of the galaxy. How far will he go to find what he has lost?

Zuckuss is teetering between life and death…
• A mysterious event has put the Gand bounty hunter in a deep coma reliving his past.
• Can T’onga and 4-LOM save Zuckuss before his mind is lost?
• And before the Empire’s most lethal unit hunting Valance catches up to them…

SHATTER!
• THE CONCLUSION OF THE BATTLE FOR THE SPARK ETERNAL!
• As DOCTOR APHRA fights for her life, she faces a dire question:
• Even IF she triumphs over the Spark, will there be enough left of Aphra to piece herself back together?

HANDMAIDEN NO MORE?
Few bonds in the galaxy are as strong as the sisterhood of the former handmaidens of Padmé Amidala. But all that was threatened when Sabé entered the service of Darth Vader, the man the handmaidens always believed was responsible for Padmé’s death. Now Dormé, Saché, Rabé and Eirtaé are determined to save Sabé – or stop her, no matter what. But the influence of the Dark Lord is strong and dangerous – and not just to Sabé. What path will the handmaidens choose? And how does all this play into Darth Vader’s true plans?

March will also see the beginning of Marvel’s Return of the Jedi 40th anniversary series. Comprised of one-shots about various characters, the party begins with Jabba the Hutt.

WHO IS PLOTTING TO OVERTHROW JABBA THE HUTT?
• Jabba’s palace is one of many places to find the vilest of scum and villainy relaxing, wet their whistles and indulge their vices…who would ever want that to end?
• Well, SOMEONE has Jabba in their sights!
• Beginning a series of One-Shots spotlighting the RETURN OF THE JEDI era, Marc Guggenheim (HAN SOLO & CHEWBACCA) and Alessandro Miracolo (OBI-WAN) bring you a tale of Jabba’s Palace you won’t soon forget!

RISE OF THE DARK SIDE!
• There is a darkness rising among the latest Jedi initiates.
• Will Master Yoda and Master Dooku be able to recognize and stop the threat?
• Or will their young students be led astray by the dark side of the Force?

Lastly, as a quick FYI, Dark Horse Comics also has a few releases in March, headlined by the long-delayed The High Republic Adventures: Quest of the Jedi. The one-shot from Claudia Gray is currently set for March 1.

Nate uses his love for Star Wars and movies in general as a way to cope with the pain of being a Minnesota sports fan. When he’s not at the theater, you can usually find Nate reading a comic, listening to an audiobook, or playing a Mario video game for the 1,000th time.