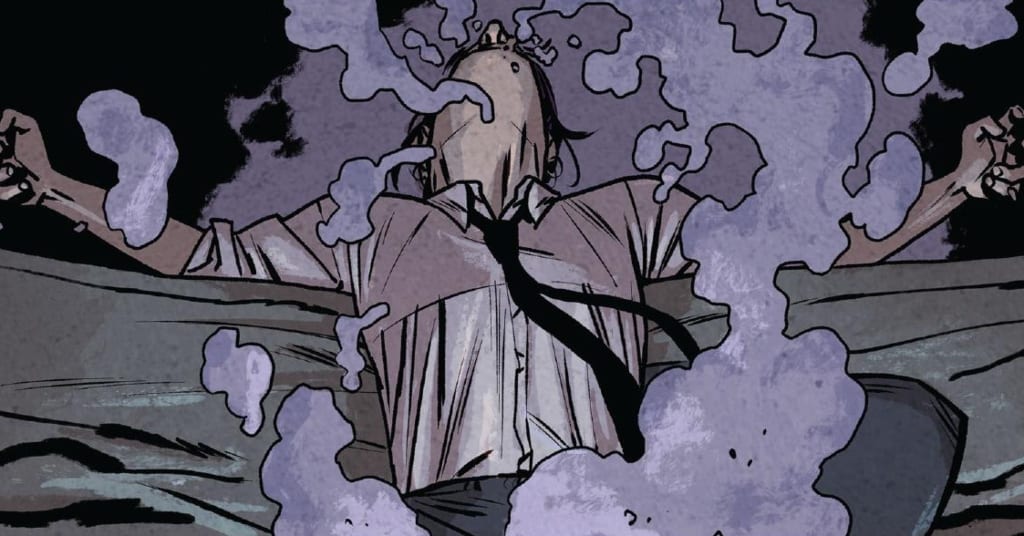 The whodunit subgenre of mystery stories is a format that seems to be experiencing a new renaissance in popular culture at the moment, between movies like Glass Onion, and comics like The Human Target and Newburn. The genre is an interesting example of an author creating a microcosm for society, using the structure to examine the power dynamics of a given time or place. That element of the genre has an interesting intersectionality with the field of speculative fiction, fantasy in particular, which also draws on contemporary or societal issues as a foundation for the world of a story. That meeting of the two genres often is the basis for urban fantasy works and works to ground the spectacle and more outlandish elements like magic and myth.

With Damn Them, All #3 – written by Simon Spurrier with art from Charlie Adlard, colors by Sofie Dodgson, color assistance by Shayne Hannah Cui, and lettering from Jim Campbell – that intersection of the whodunit and the fantastical comes into a sharper focus as ‘Bloody’ El works to uncover more info about the demon’s invading Earth. Between her magical trip and the information shared by Pruflas, and a call for vengeance after Frankie’s wife is murdered by a massive dog demon. El begins to piece together that Theo Bolster, an old acquaintance of her uncle Alfie, and the blind man from the previous issue, have something to do with the demon arms race.

The information is intercut with the story of Abahir Sinimo, a Syrian surgeon turned immigrant, forced to live on the streets after Brexit. Abahir gains possession of a coin and uses it to become mayor of London, full of good intentions but just as susceptible to corruption as anyone else, according to Pruflas. Theo is helping to pull the strings of Abahir’s ascension, and in returning to the present, Theo also shares a coin with Carlin. The issue with the revelation Theo has a wealth of demonic coins, with a possible tie to Alfie’s death, and is now ready to show the shape of his plans.

Spurrier’s writing does an excellent job of moving the issue through multiple plotlines that are equal parts violent carnage and magical system exposition. The drug trip and Pruflas narration work to explain the changes in the world, along with framing the experiences of the demons dragged to earth. Pruflas explains that Hell was not a tortuous existence, and the demonic beings in the coin were free to exist in their inhibited forms in this other plane. Once they’re summoned to Earth, they’re forced to conform to the reality around them, and the act of that process has distorted Hell. Spurrier’s ability to take the extended sequence of this explanation and convert it into a compelling plot is a testament to the writer’s ability to command the words on the page.

That writing is also just as strong as he moves from the exposition and explores the ramifications of the ease of demonic summoning. Liza’s death at the hands of Theo’s demon is a reminder of the scope of the battle between these various persons, with supernaturally powerful entities working like nuclear weapons in the hands of children. Spurrier’s whip-cracking dialogue gets to shine in this sequence, with Liza’s final line before death working as a haunting bit of rejection. It’s a jaded, defiant sentence, and speaks to the core of the tension between the crime and mystical elements of the story.

Just as Spurrier brings a sharp third dimension to his writing, Adlard’s art matches in kind, offering both grotesque scenes of visceral action and introspective and quiet images. The sequence of Liza’s death is a violent, gripping series of panels that make clear the damage being done while utilizing Dodgson’s coloring effect for the demon’s appearance. The prismatic refraction of color stands in sharp contrast to the spilled blood, and Adlard’s thick, concise linework ensures the action is not overtaken by the effects.

That sense of framing and clarity appears just as much in the flashback sequences when the coloring mutes and Ellie’s backstory is broken down in a single page. Ellie’s face is never shown in full in these panels, creating a distance to the memories, as though the exorcist is unable to fully face them. Adlard starts with strong detail in the first two panels, but as Ellie descends into heroin and through her various ordinations, the images become fuzzier, as the subjects of the panel, the priests, rabbis, shaman, etc. she studied under are present. Adlard makes clear that these figures are unimportant, showing the aimless, spiteful path Ellie took throughout her training. The point made by this transition from clear to distorted and back to clear is Ellie’s shift in perspective.

Adlard’s images sync with Spurrier’s words on the page, and the cost of magic in this world becomes clear. It’s a hell of a bite to give this issue but speaks to the level of synchronization that this book’s craft has developed. Spurrier, Adlard, Dodgson, and Campbell all bring a perspective to this sequence, and it pays off in the depiction, creating not only what appears as a central theme of the work, but a narrative and mechanical foundation set to be broken.