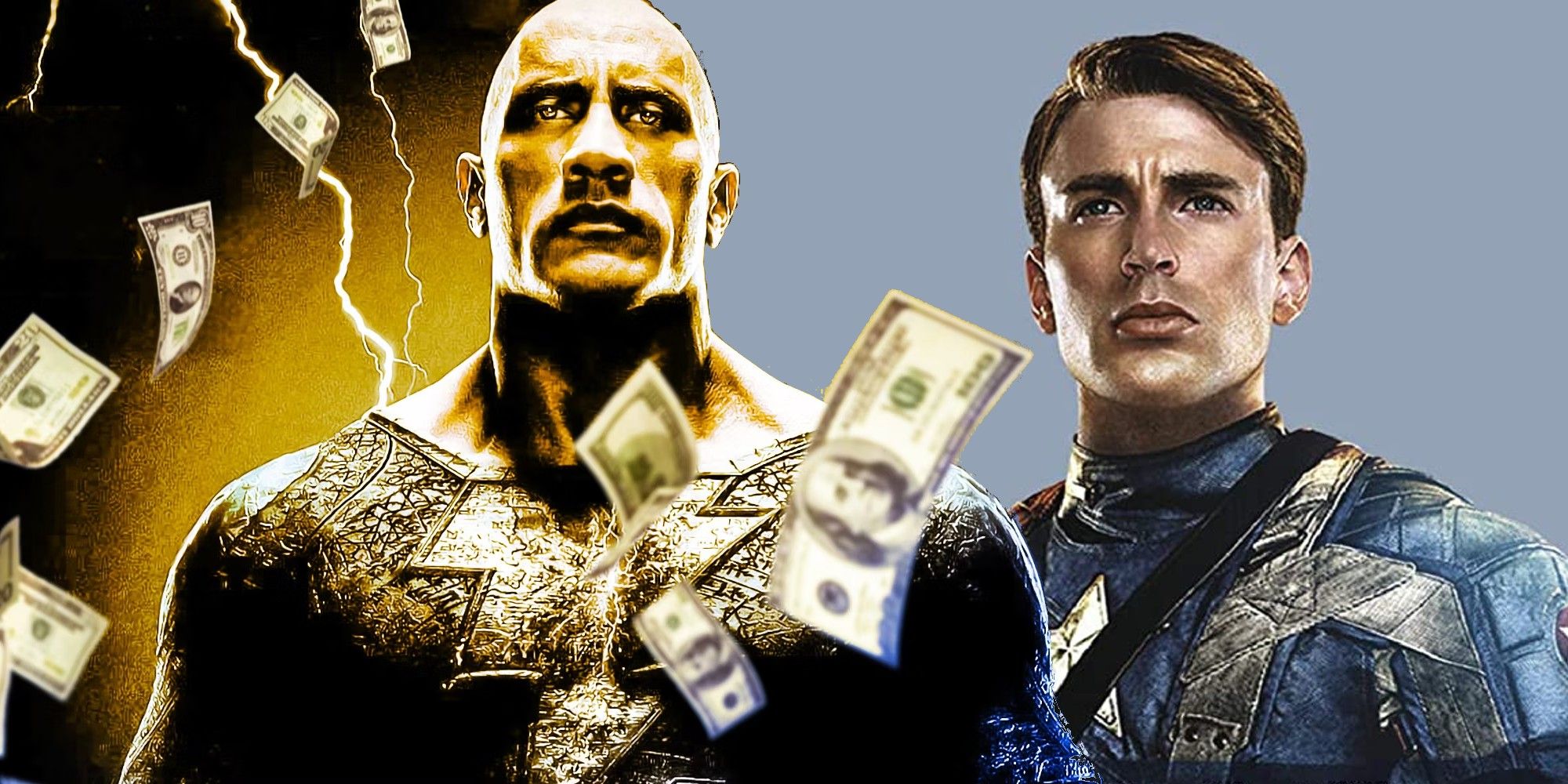 The Rock has compared Black Adam‘s box office to Captain America: The First Avenger‘s, which doesn’t make sense. Black Adam has had an interesting road to release, being in development for years and then finally releasing in a transitional phase for DC. It was never set to be a $1 billion film, but at one point it looked like it might not make a profit.

Dwayne ‘The Rock’ Johnson took to twitter to confirm that Black Adam will in fact make a profit. Not a large one, but a profit all the same. Per Deadline, the film is expected to net somewhere between $52M-$72M. The Rock says at nearly $400 million it is great news as they are building the future of DC and compares the Black Adam box office with Captain America: The First Avengers‘s, saying how that film made $370 million total. Maybe it’s because he’s currently working with Chris Evans and Captain America is fresh in his mind, and it is one first film in a franchise to another, but this comparison doesn’t make sense when looked at a bit closer.

Related: How The DCU Changes If Affleck’s Batman Never Lost His Robin

Black Adam’s Box Office Is Lower Than The First Avenger’s (Adj. For Inflation)

A lot has changed at the box office since The First Avenger was released in 2011. While it might look like Black Adam has done better on paper, when inflation is taken into account Captain America‘s box office would be closer to around the $490 million mark. When looked at in those terms, Captain America: The First Avenger actually did better numbers than Black Adam at the box office. Of course, it’s not clear if either movie was released in the opposite year if they would have made the same numbers, but this is why a direct comparison doesn’t work.

Even without inflation taken into account though, Captain America is better off, as it was cheaper to make. Black Adam‘s budget was higher, coming in at $195 million, whereas The First Avenger‘s budget came in at $140 million. The Captain America budget means Marvel had a bigger profit margin on the film. Marvel spent less and earned more, which at the end of the day is the main goal for all studios.

Black Adam isn’t as expensive as other DC films, but they also made a higher profit. Man of Steel and Batman v Superman: Dawn of Justice both cost over $200 million, but made over $650m and $850m respectively. On the other hand, Black Adam is more expensive than the likes of Aquaman and Wonder Woman, which are two of DC’s highest-grossing films ever. The difference between the DCU and the MCU is Marvel is much more consistent. It usually spends around $150m-$200m and is at an average of almost $1 billion per film.

Perhaps the biggest reason why comparing the two films’ box office doesn’t make sense is that the 2022 DCU is very different from the 2011 MCU. The Rock is correct that Black Adam is a new character and making a profit is great for the future of the DCU, but it’s not a 1:1 comparison as the MCU was just starting out in 2011. The DCU has been around for nearly a decade, whereas the MCU was still in its infancy. The Avengers hadn’t even been released, whereas, on DC’s side, it is many years since Justice League.

Related: How Dick Grayson’s Nightwing Can Appear In The DCU

At the time, Chris Evans wasn’t the big star he is today. While he’d starred in other big movies like Fantastic Four, he wasn’t as well known. The Rock on the other hand is the biggest movie star in the world. He has been teasing the character’s DC future since before Black Adam was released. Even though The Avengers was on the horizon, Marvel was focused purely on the Captain America solo film first. This shows how times have changed since the MCU popularized the shared cinematic universe and since the difference in the release of these two films.

Black Adam comes at an interesting point for DC. While it has been around for a while, it is almost back at the start of a new era. James Gunn and Peter Safran are planning the next 10 years of the DCU, with Black Adam surely a huge part of this moving forward. When looked at in those terms, Captain America and Black Adam are in similar situations: released just before a big shift, the release of The Avengers in the MCU’s case. With all of that in mind, though, the DCU has had many movies up to this point, so a metaphorical reset doesn’t change its comparison to the MCU in 2011.

Black Adam‘s box office started out well, it became Dwayne Johnson’s highest opening weekend ever, so it’s not clear why exactly it dropped off. While the reviews weren’t terrible, they weren’t great either. It wasn’t a movie that had the audience rushing out to see it. So, because the word of mouth wasn’t strong enough, it left a heap of the box office on the table, as well as a lack of repeat viewings from those that had seen the movie.

Related: Why Green Lantern Is So Important To James Gunn’s DCU Franchise

Even though the comparison with Captain America: The First Avenger doesn’t help, it is not the end of the road for Black Adam. Even though Shazam! cost less to make, it looks like they will end up with similar takings at the box office. This is good news as the Zachary Levi film got a sequel, Shazam! Fury of the Gods, which means the Dwayne Johnson headliner could expect the same. And with the two characters set to come up against Henry Cavill’s Superman in the near future, The Rock is right, they are building the new future of the DCU step by step.

More: The MCU Proved Its Secret Weapon Against The DCEU (Again)