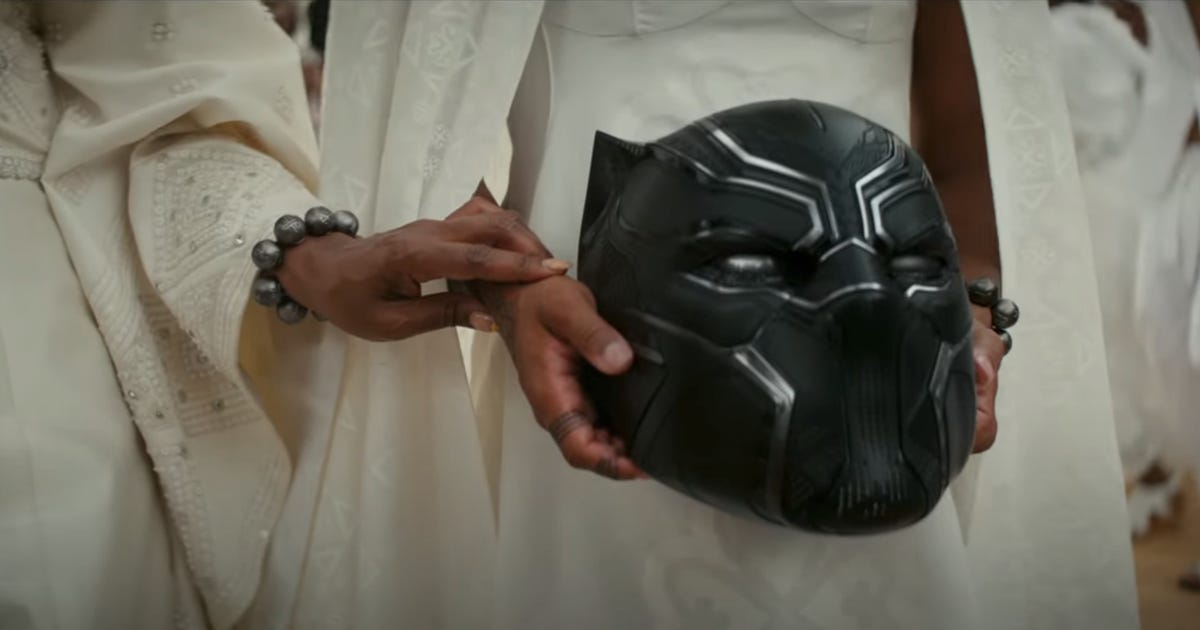 Black Panther: Wakanda Forever landed in theaters last Friday, returning us to the technologically advanced African nation as its people grieve the loss of King T’Challa. The sequel to 2018’s Black Panther is the 30th Marvel Cinematic Universe movie, and it has the most touching post-credits scene imaginable.

T’Challa, who held the Black Panther mantle in addition to his royal status, was played by Chadwick Boseman, who died from colon cancer at age 43 in 2020. Marvel Studios President Kevin Feige promised Boseman wouldn’t be replaced in the role, and the movie sees the debut of a new Black Panther.

And if you stick around after the credits roll, you’ll also be treated to an unexpected part of T’Challa’s legacy. SPOILERS ahead.

Having achieved peace with Namor and allowed herself to truly feel, for the first time, the loss of T’Challa, new Black Panther Shuri (Letitia Wright) burns her funeral garb on a beach in Haiti, symbolizing the end of her grieving process.

Having given Shuri enough space, T’Challa’s former girlfriend Nakia (Lupita Nyong’o) steps out onto the beach with a little boy (Divine Love Konadu-Sun). She introduces him as Toussaint, the son she secretly had with T’Challa.

Shuri notes that Toussaint is a name with a lot of history — she’s presumably referring to Toussaint Louverture, the most prominent general during the Haitian Revolution. He’s credited with leading the most successful revolt of enslaved people in history, which led to Haiti declaring itself an independent nation in 1804.

Young Toussaint was kept hidden in Haiti to protect him from the pressures of the Wakandan throne — explaining why Nakia didn’t attend T’Challa’s funeral — but mentions Queen Ramonda got to meet him before she died. The charming kid instantly bonds with Shuri and decides to reveal a secret: Toussaint is his Haitian name, but he also has a Wakandan one.

“My name is Prince T’Challa, son of King T’Challa,” he says.

Excuse me, my eyes got a little damp revisiting that moment.

What does it mean?

Marvel ensured that someone named T’Challa lives on in its epic cinematic universe. It’s probably too early to tell when this young man will become the Wakandan king or Black Panther, since we saw M’Baku challenge for the nation’s throne while Shuri carries the heroic mantle.

For now, Prince T’Challa is a potential snapshot of an upcoming generation of MCU heroes — he represents hope for the future (after Thor: Love and Thunder, it’s the second Marvel film in a row that ends with a Marvel hero’s child). This scene is also a classy, emotionally fulfilling twist on the post-credits tradition of teasing future storylines.

In the comics, T’Challa is still alive and serving both as Black Panther and king of Wakanda. He doesn’t have a son with Nakia, however, and his most prominent relationship was with Storm of the X-Men (who hasn’t been introduced in the MCU yet). They were married, but that ended after the Avengers entered a conflict with the X-Men.

Is there a post-credits scene?

Black Panther: Wakanda Forever doesn’t include a post-credits scene but does include a message to assure us that we haven’t seen the last of these characters.

“Black Panther will return,” it reads as the credits reach their conclusion.

What does it mean?

We don’t know where Black Panther will show up next, since the third movie hasn’t been announced yet. A Wakanda-centric Disney Plus series was announced last year, but there hasn’t been an update on that since.

It also seems like morally questionable CIA Director Contessa Valentina Allegra de la Fontaine (Julia Louis-Dreyfus) is forming the Thunderbolts, a superhero team made up of characters with dark pasts, for nefarious purposes.

Given Val’s involvement in the events of Wakanda Forever and her acknowledged desire for vibranium — a rare metal that’s mostly found in Wakanda — it’s possible she’ll target the nation once she’s got her superhuman pawns assembled. Thunderbolts is scheduled for a theatrical release on July 26, 2024.

Wakanda Forever is the final movie in Phase 4 of the MCU, but Shuri could show up in pretty much any of the movies announced for Phases 5 and 6. These three phases are collectively known as The Multiverse Saga, mirroring Phases 1, 2 and 3’s Infinity Saga.

It currently looks like Kang the Conqueror (whom we’ll meet in next February’s Ant-Man and the Wasp: Quantumania) will be the main baddy of this era, but perhaps a villain more arch than him will emerge in the coming years. Regardless, future global and multiversal MCU threats will almost certainly make their way to Wakanda.

Movies Coming in 2022 From Marvel, Netflix, DC and More