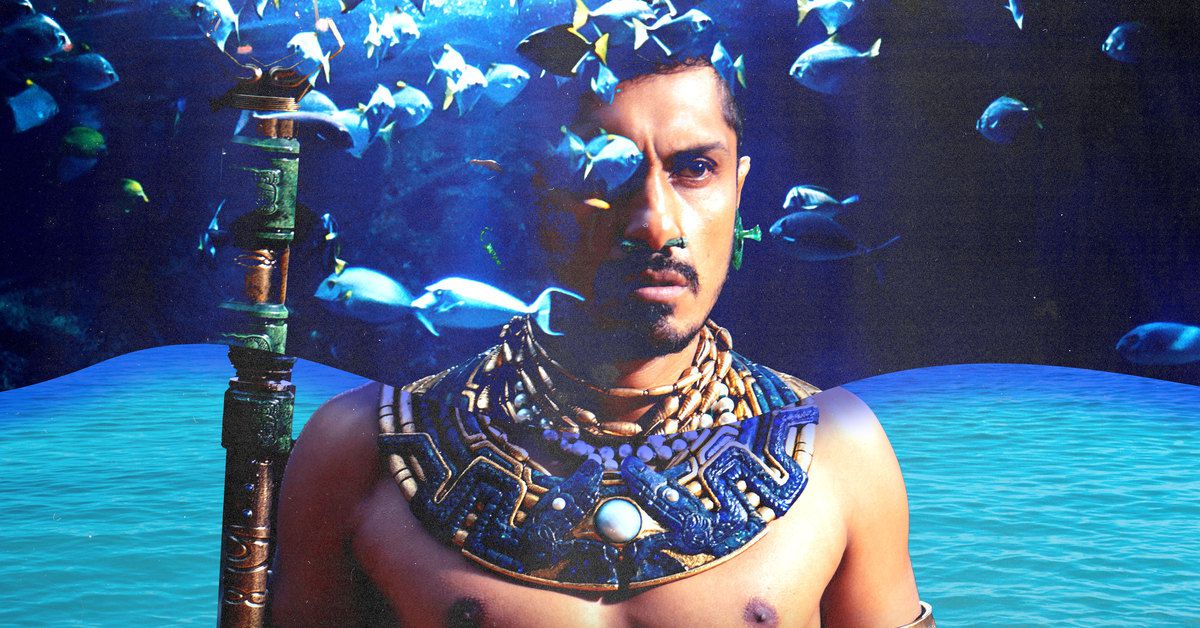 After submerging himself in the world of Pandora for more than a decade, James Cameron resurfaced with a bold declaration: Aquaman ain’t shit. “I’ve spent thousands of hours underwater,” Cameron told Yahoo in 2019 when asked about the movie. “I’m very literal about my underwater. It needs to look like it’s real. And while I can enjoy that film, I don’t resonate with it because it doesn’t look real.” As the first person to make a solo descent into the Marianas Trench—this is not a joke—Big Jim is more qualified to critique Ocean Cinema™ than any other filmmaker on the planet. Best of all, Cameron is going to back up his big talk next month with Avatar: The Way of Water, the long-awaited sequel to the highest-grossing movie of all time that will, as the title implies, explore the wonders of Pandora’s oceans. If this trailer doesn’t make you want to bring a snorkel and an edible to an IMAX theater, may Eywa have mercy on your soul:

But if The Way of Water is the main course for Ocean Cinema™ acolytes like myself, then Black Panther: Wakanda Forever has been a pleasantly surprising amuse-bouche. While much of the publicity surrounding Wakanda Forever has understandably centered on the late Chadwick Boseman and how the sequel reckons with his loss, the film also represents a meaningful sea change (sorry) for the Marvel Cinematic Universe. MCU movies have traversed galaxies and multiverses over the past 14 years, yet somehow, the ocean has eluded their grasp. Thankfully, that all changes in Wakanda Forever with the introduction of Talokan: an underwater kingdom with Mesoamerican roots whose deified leader, Namor (Tenoch Huerta Mejía), is essentially the Marvel equivalent to Aquaman.

Like Erik Killmonger (Michael B. Jordan), Namor wants to take revenge on the colonialist powers that oppressed his people, and has no qualms about killing whoever gets in his way. Wakanda Forever wastes little time showing Namor and his aquatic subjects in action: Early in the movie, an American-sanctioned mining operation in the Atlantic Ocean discovers vibranium on the ocean floor, which threatens to expose Talokan to the rest of the world. (Talokan itself is powered by vibranium, making the country an interesting counterpart to Wakanda.) The manner in which the Talokanil wipe out the Americans is swift and terrifying: many of them are lured into walking off the ship by hypnotic humming, echoing the myth of enchanting sirens leading sailors to their doom. The stragglers are picked off before they can get help—Namor effortlessly hurls a helicopter into the water like he’s competing in a track and field meet.

With the exception of Namor, the Talokanil have light blue skin when they’re out of the water; in fact, they wouldn’t seem too out of place among the Na’vi on Pandora. (In the ocean, meanwhile, their complexion more closely resembles the skin color of their Mesoamerica ancestors.) Given Cameron’s unenthusiastic feelings about Aquaman, I’m not sure he would approve of Avatar being compared to another superhero movie, but it’s certainly notable that Wakanda Forever’s Talokanil have an intimate relationship with their environment similar to the Na’vi. By all accounts, the Talokanil use whales to cover great distances before the animals fling them in the direction of enemies like a catapult. It’s ridiculous, yes, but in a sequel to a movie in which an Oscar-winning actor rode a rhinoceros into battle, whale-based ridesharing shouldn’t seem that far-fetched.

Besides, when it comes to underwater worldbuilding, director and cowriter Ryan Coogler wanted to embrace the sillier aspects of Namor’s history in the comics. “With making these types of movies, you’ve got to lean into the weird stuff, or you risk missing what makes it fun,” Coogler told Entertainment Weekly in October. “He’s got really unique features and things that don’t necessarily go together. He can breathe underwater, obviously, but he’s got these little wings on his ankles. He’s got pointy ears and walks around in his underwear. It’s all fun, man.” To that end, when Namor meets with Shuri (Letitia Wright) and Queen Ramonda (Angela Bassett) in Wakanda to talk about potentially allying their two nations, he straight-up gives them a conch shell that can be used to summon him as if it were a pager. (More importantly, Namor engages in international relations while wearing only boxer briefs, and his throne is adorned with the humongous jaw bones of a megalodon—this guy rules.)

Of course, any ocean-adjacent superhero blockbuster will now find itself measured against Aquaman, which remains the only movie in the DC Extended Universe to gross more than a billion dollars at the box office. As Coogler explained to Uproxx, Aquaman demonstrated there was a market for comic book films set below the surface, but at the same time, he wanted to provide the audience with a different moviegoing experience. Granted, if you’ve watched Aquaman, then you know it’s a tall order to follow in the footsteps of a tentpole in which an octopus plays the drums before an underwater gladiator duel and Julie Andrews voices an ancient leviathan that threatens to eat Jason Momoa. But Wakanda Forever succeeds in charting its own underwater course by striking a balance between not taking itself too seriously and showing reverence for the cultural influences behind Talokan. (At one point, when Shuri is given a tour of the kingdom by Namor, some inhabitants are spotted playing an underwater version of a historical Mesoamerican ballgame.)

And for all the animosity that develops between Wakanda and Talokan, the incorporation of so much water was an appropriate throughline across the movie. In most religions, water represents rebirth and transformation, which dovetails nicely with Shuri eventually taking up the Black Panther mantle after T’Challa’s death. For a movie that is very much about the complicated nature of grief—whether it’s the characters mourning T’Challa or the audience doing the same after losing Boseman—the abundance of water is a potent symbol for collective healing.

As for the Cameron Principle—does the underwater world look real?—it goes without saying that Talokan is never going to be mistaken for a segment from Planet Earth. But the fact that Wakanda Forever employed a professional freediver to train actors to hold their breath for longer periods underscores that there was an effort to combine visual effects with practical underwater stunt work. In Coogler’s own words, the water tank became a “rite of passage” for everyone working on the film. And as much as Cameron would likely prefer to film actors at the bottom of the sea, risking their lives in the quest to create groundbreaking cinema, he also opted to have The Way of the Water cast hold their breath utilizing freediving techniques in large underwater tanks. (Aquaman, conversely, was entirely reliant on state-of-the-art effects.)

It also helps that Wakanda Forever isn’t afraid to get a little wet outside of the ocean, too. Thanks to the power of vibranium, the Talokanil have created their own grenade-like weapons, which when detonated release a concentrated blast of water, to hurl at adversaries. In theory, the Talokan Water Grenades (technical MCU term) are like what you’d get if the Navy had a private military contract with the folks behind Super Soakers. In practice, the grenades threaten to turn any set piece on land into a soggy nightmare, while being responsible for some of the most arresting imagery in the film.

Considering Wakanda Forever had the second-biggest opening weekend of the year, a third Black Panther film feels like a foregone conclusion. With Namor still around to pose a threat to the surface world, Wakanda Forever shouldn’t be the last time audiences get a taste of the Talokanil. True to real life, where we know more about the surfaces of Mars and the moon than we do about our own oceans, the MCU has spent several movies in the far reaches of space while ignoring the narrative potential of the substance that covers greater than 70 percent of the planet. After staying dry through 29 films, Marvel has finally sprung a leak with the introduction of Talokan, and the MCU will be all the better for it.