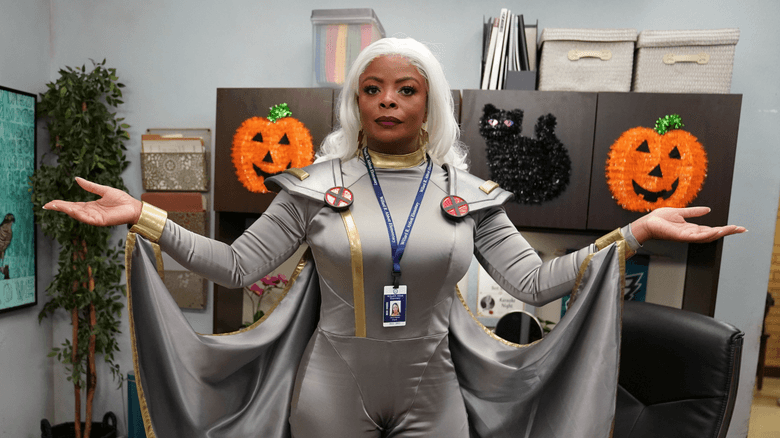 It’s Halloween time at Abbot Elementary and some of the teachers (and students) are getting into the spirit of the season with Marvel Halloween Costumes! In the latest episode of the Emmy-award-winning ABC show, Principal Ava (Janelle James) stuns in a Storm outfit, while Melissa (Lisa Ann Walter) and her aid Ashley (Keyla Monterroso Mejia) both show up as Scarlet Witch. However, Mr. Johnson (William Stanford Davis) is not dressed as Vision even though you might think that.

In the episode, titled “Candy Zombies,” a student steals a bag of candy meant to be given out to the kids at the end of the day and starts distributing it during school hours, the teachers band together to find the culprit — and spoiler alert — it turns out to be Baby Thanos. What did the Halloween candy cost him? Everything.

During the red carpet for Marvel Studios’ Black Panther, creator, writer, and star Quinta Brunson stopped by the Marvel livestream to talk about the all-new episode, mentioning that the show’s writer’s room is full of Marvel fans. Brunson’s one herself, and even has a Spider-Man tattoo! Watch the full interview below:


Want to see all the costumes in the latest Abbot Elementary episode? Find them all in the image gallery below.