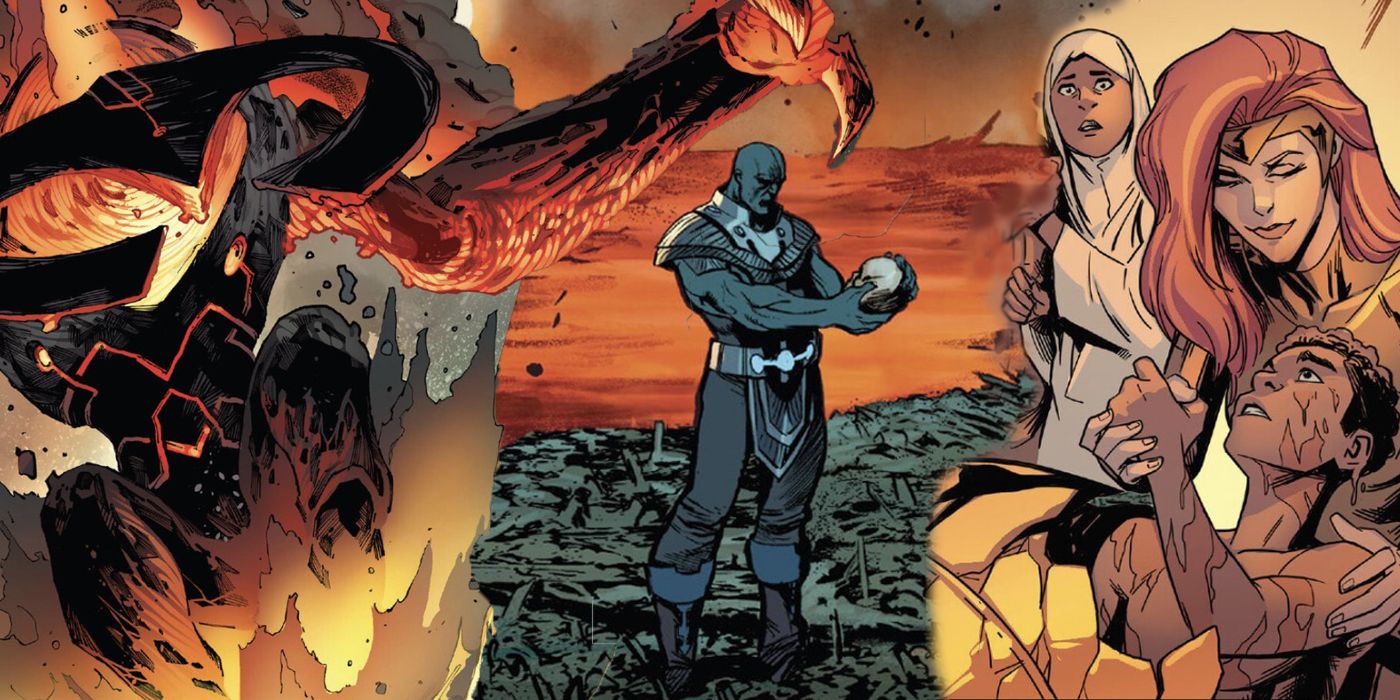 In Marvel Comics, the Eternals have three directives that are programmed into their very being: protect Celestials, protect the Machine (meaning the Earth), and correct excess deviation. As with human laws, different Eternals have interpreted their rules in different ways. At the start of Marvel’s A.X.E. Judgment Day event, the Prime Eternal Druig decided that Mutants, now that they could resurrect, represented “excess deviation” and must be corrected, i.e., destroyed.

The Judgment Day event has seen a complete transformation of the state of the world. The war between the Eternals and the Mutants physically devastated both the Earth and Mars (now known as Arakko). To end the war, a group of heroes created a new Celestial (the Progenitor), which proceeded to judge the living creatures of Earth and then attempted to destroy it. Although much of the Progenitor’s destruction was reversed in the end, the world was still left with massive trauma from the event.

10/10 Arakko Was Devastated And Isolated By Uranos

During the war between the Eternals and the Mutants, Druig knew that the million Mutants living on Arakko would be a powerful enemy force if they were not contained. Druig’s grandfather, Uranos, was a prisoner of the Eternals. Uranos, who is also Thanos’ great-uncle, is one of the most powerful Eternals, and he attempted to slaughter all non-Eternal life many millennia ago.

Druig gave Uranos one hour to teleport to Arakko and cause destruction. The mutants on Arakko put up a valiant fight, but Uranos caused incalculable devastation. After the fighting, countless Arakkii were dead, including Magneto, who asked not to be revived by the mutants’ resurrection protocol. The transport gates between Earth and Arakko were also damaged, making it that much harder to repair the devastation.

9/10 Krakoa Was Shattered By The Eternals’ Attack

When the Eternals began their attack against the Mutants on Krakoa, they summoned “The Hex,” which are enormous battle Eternals. These Kaiju-sized entities wreaked havoc on the island and its infrastructure. If the Progenitor had not stopped the attack, they likely would have destroyed Krakoa completely.

RELATED: X-Men: Your Guide To The Members of Krakoa’s 2022 X-Men Team

After the X-Men entered the battle to resist the Hex, the collateral damage from those fights only damaged the island more. Once the Mutants return to their nation, they will have an epic rebuilding task ahead of them. Many Mutants also died during the attack, which will further strain the capacity of the five Mutants responsible for resurrecting their peers.

8/10 Select Humans May Now Be Resurrected On Krakoa

After Cyclops and Jean Grey revealed to the press that Mutants have the power to resurrect their dead, the human population was outraged. Many people thought it was unfair that the Mutants would reserve that power only for themselves. Anti-Mutant sentiment swelled.

In the aftermath of the Judgment Day events, the Mutants decided to allocate 5% of the resurrection team’s time to restoring deceased humans. Rather than helping the rich and powerful, they would focus on the weak, poor, and those in need. Jean Grey characterized the agreement as an act of foreign aid. Jean and Cyclops hoped this move would help reduce anti-Mutant sentiment, but only time will tell.

At the start of the war between the Eternals and the Mutants, a large portion of humans supported the Eternals because of anti-Mutant prejudice. The revelation of the Mutants’ ability to resurrect their dead only increased human resentment. Many humans cheered as the Eternals began their assault on Krakoa.

After Sersi revealed the secret behind the Eternals’ resurrection process, however, the Eternals become a new focus of human resentment. People who were previously chanting and throwing things at Mutants began doing the same to the Eternals. The Eternals are programmed to protect humanity, which makes their poor treatment even more difficult to bear.

6/10 The Mutants And Eternals Will Be Allies Moving Forward

The entire Judgment Day situation occurred because of the war between the Eternals and the Mutants. It is therefore fitting that one of the results of the experience was an alliance between Mutants and Eternals. The humans’ new anger at the source of the Eternals’ resurrections no doubt helped to push the two groups together as well.

After the fighting was over, the Eternals apologized to the Mutants in front of the U.N. They promised to aid the Mutants in their struggles. With anti-Mutant organization Orchis’ activities driving anti-Mutant sentiment ever higher, not to mention their direct attacks against the Mutants, this could be the ideal time for the Mutants to gain a powerful new ally.

Many people received a failing verdict from the Progenitor, including some of the heroes who have been working to protect the world. The heroes’ reactions to that failure varied widely according to their temperaments. Jean Grey, for example, took the decision hard. As one of the world’s most powerful beings, she was not used to failing at anything.

Captain America was the first to be judged, and the Progenitor decided Cap had failed the world by failing to influence his own country toward a kinder path. Although the verdict hit Cap hard, in the end it only hardened his resolve to try and do better to help the people of the world. Many others, super-powered or not, around the world are facing a similar reckoning with their own actions.

At the end of the Judgment Day event, the Progenitor agreed with the Eternals that it had not been an effective god. It decided that Ajak was more worthy of the divine power it wielded. After undoing the damage it had caused during its attempts to destroy life on Earth, it transferred its powers to Ajak.

At this point it is somewhat unclear exactly what effect Ajak’s transition will have on the Eternals, let alone the Earth. Presumably the programming that requires her to protect humans and the Earth still exists within her. The Progenitor stated that Ajak will continually strive to be worthy of the people of Earth. Hopefully, for the world’s sake, she will be a kinder god than the Progenitor was. Otherwise, the heroes of Earth will have a new challenge on their hands.

3/10 The Avengers Will Need To Recover From Their Experience

The Avengers were trying to help when they got involved in the war between the Eternals and the Mutants. Their involvement had a high price, however, both for themselves and the world. Tony Stark was instrumental in the design and creation of the Progenitor. The Celestial had elements of Tony’s personality programmed into its systems.

Moving forward, Tony will no doubt be dealing with the personal ramifications of being partially responsible for the destruction the Earth suffered at the hands of the Progenitor. He saw his teammates Thor and Captain Marvel, along with countless others, be killed by the Celestial he created. Although they were resurrected, the memories of the experience still remain and will no doubt haunt everyone involved.

2/10 Massive Rebuilding Will Be Required In Major Marvel Cities

During the Progenitor’s judgment of the Earth, much of the planet was devastated by the Celestial’s sentencing. Cities were destroyed using powerful weapons from Uranos’s armories. The Progenitor created a huge rend in the surface of the planet when he tried to access the Machine directly. Billions of people died.

RELATED: The 13 Darkest Marvel Comics Ever

Although the devastation caused by the Progenitor was reversed before he abdicated his powers, any damage that was caused before that, including during the war between the Eternals and the Mutants and the attack on Arakko, was permanent. This included massive tidal waves that occurred when the Hex emerged from the Pacific Ocean, for example. The people of Earth will have an enormous task before them to repair the planet-wide damage caused by the conflict.

1/10 The A.X.E. Crisis Is Over, But Judgment Continues

Throughout the Judgment Day event, the story was narrated by the voice of the Progenitor. The narration continued even after he transferred his powers to Ajak, at which point he issued a chilling warning: judgment would continue.

The Eternals were able to convince the Progenitor to spare the population of Earth by arguing that he could not fairly judge everyone in the span of 24 hours, and he himself was not worthy. He ultimately agreed. However, the implication at the end of the event is that judgment will continue under Ajak. No time frame was given for this judgment, but hopefully the memory of the experience will encourage everyone to try and be worthy of a thumbs-up in the future.

NEXT: 10 Marvel Events That Were Worth The Hype