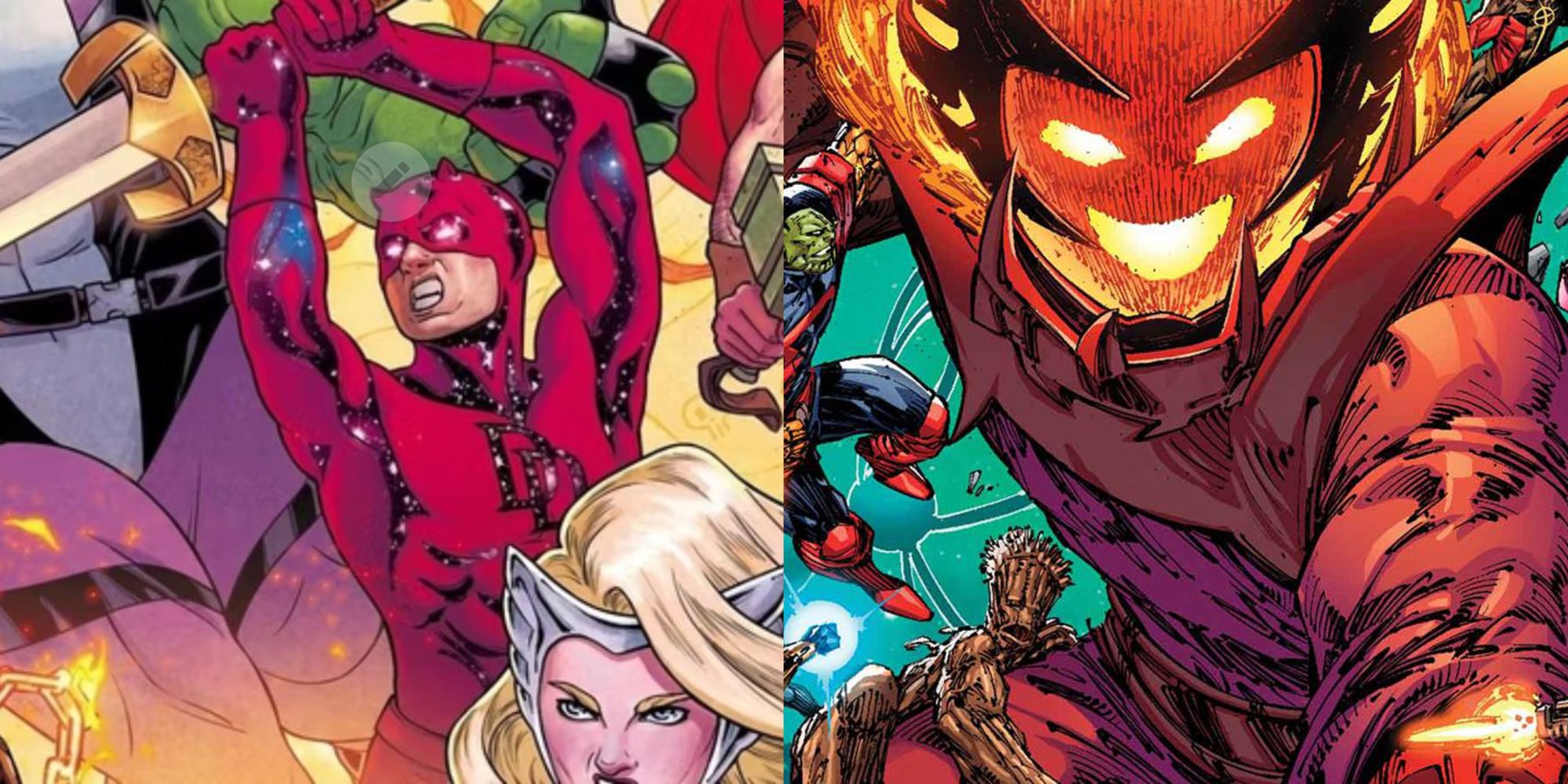 Dating back to the 80s, Marvel has produced dozens of events that bring all heroes together in a storyline. The main purpose behind events is to pit Marvel’s most iconic figures against a specific threat. The event tpically crosses over through many different series through tie-ins, in addition to a central story. Since the first event, many stories have become staples for Marvel while others have gone almost unnoticed.

RELATED: 10 Marvel Events No One Wanted

Every casual Marvel fans knows about Civil War or The Infinity Gauntlet, especially thanks to the Marvel Cinematic Universe. But several other events get way less of a fuss. Some fans would love to see these lesser known comics adapted, but first, readers have to actually know these events exist.

10/10 Utopia Was Too Similar To Previous Stories

After Simon Trask pushes for a more radical mutant regulation, riots break in all of San Francisco. To bring order, Norman Osborn pits the Dark Avengers against the X-Men, who, led by Scott Summer, must defend their people. In the process, Osborn created his own Dark X-Men.

At first sight, it feels like Utopia by Matt Fraction and Mike Carey is just an attempt to create the Dark Avengers in the same way that they created the Dark Avengers, but it isn’t true. On one hand, this series sets the ground for Nation X. On the other, it establishes an interesting story about hate speech in politics.

9/10 Fans Are Coming Back To Fear Itself

In Fear Itself, by Matt Fraction, Stuart Immonen, and Wade Von Grawbadger, the heroes of the Marvel universe have to face The Serpent, the brother of Odin, and the Asgardian God of Fear. The Serpent’s War starts after the Serpent, also known as Cul Borson, returns to reclaim his place on the throne of Asgard after Odin took it.

Out of many Thor-centered events, Fear Itself features one of the most dangerous Thor villains. Cul Borson is a god, just like Thor and Odin. This makes him quite a challenge for all heroes. In addition, this series deals with the aftermath of important arcs in Marvel, like Captain America’s grief after losing Bucky. Fear Itself didn’t get the praise it deserved at its time, but now that Cul returned for Jason Aaron’s run, more readers are discovering it.

8/10 X Of Swords Got Lost Between Other Stories

X of Swords, by Jonathan Hickman and Tini Howard, follows the epic battle between the Swordbearers of Arakko and the Swordbearers of Krakoa in a series of tournaments that will decide the fate of the mutantkind. Wolverine himself describes the situation as a “multidimensional feud over land rights.” This makes sense, but it’s only the tip of the iceberg.

After the creation of the mutant nation, Krakoa, X Of Swords proposes a new attempt at modifying the status quo of the island. This series definitely got way less attention than House of X and Powers of X, but it’s just as exciting. A sword tournament is rarely less than epic.

A six-issue miniseries, War of Kings showcases the epic war between the Shi’ar and the Kree. Since Inhumans have reclaimed the Kree empire, Black Bolt unites both races by putting them against the Shi’ar – which results in a colossal battle that eventually involves the Guardians of the Galaxy, the Starjammers, and even the Nova Corps.

The 2009 event War of Kings, by Dan Abnett and Andy Lanning, pits two of the most powerful races in the Marvel Universe against each other. Obviously, things get wild almost immediately. No wonder the events’ tagline is “When kings collide, the galaxy will tremble”. It’s impossible to know why this event was so ignored at its time, but hopefully, more readers will start appreciating it soon.

6/10 Fans Ignored King In Black, One Of The Darkest Moments In Marvel

In King in Black, by Donny Cates and Ryan Stegman, Knull arrives on Earth with an army of symbiotes ready to invade Earth. As Eddie Brock and Venom sense him, the antihero warns Earth’s superteams so they can assemble against this powerful supervillain.

Symbiotes have always been one of the scariest villains in all of Marvel. Knull, their father, is as dangerous as they come. He created one of the most potent weapons in the Marvel Universe, All-Black the Necrosword. Knull’s attempt to conquer Earth is one of the darkest moments of this universe, but few readers acknowledge the event during its time.

After Malekith is crowned king of Svartalfheim, he assembles a Dark Council that assists him to conquer the 10 realms. Eventually, he points his armies toward Earth and wins. Marvel’s most iconic heroes regroup and plan against the invasion of the Dark Elf.

Jason Aaron’s exquisite run on Thor had many high points during its time. War of the Realms, which he created with Russell Dauterman, is definitely one of them. The series expanded Aaron’s take on Thor to other heroes, including incredible moments like Daredevil using Heimdall’s sword or Dora Milaje fighting Frost Giants. Unfortunately, it didn’t get the attention it deserved before Thor went to Donny Cates.

Annihilation follows the events before, during, and after Annihilus used the Annihilation Wave to take control of the positive matter universe to claim it as its own. This series works as a chronicle of the invasion, which only modifies the status quo even more as time passes. Annihilation was created by Dan Abnett, Simon Furman, Keith Giffen, Javier Grillo-Maxuach, Andy Lanning, and Gabriele Dell’Otto.

Annihilus is one of those villains that take things to the next level. His cosmic-level abilities and intentions raise the stakes immediately, so Annihilation is quite a journey. Annihilation features many powerhouses of Marvel, like Drax the Destroyer, Thanos, and Ronan. Most casual fans don’t know about this series, but they definitely should.

When an Inhuman with precognitive abilities surfaces, Earth’s superheroes find themselves in the middle of a new conflict between them. A group of heroes led by Captain Marvel think Ulysses’ powers can be a tool for preventive justice, while the others led by Iron Man believe people deserve an opportunity to change their own fate.

RELATED: 10 Marvel Events That Were Worth The Hype

Civil War II, by Brian Michael Bendis and David Marquez, raises an interesting question about the determinism vs. free will dichotomy. Unfortunately, its premise got lost in comparisons against Civil War. Most people who enjoyed the first part of the installment didn’t give II a chance, so it wasn’t as successful as it should have been.

2/10 AXIS Had A Massive Change Of Morality In Marvel

After harnessing the power of Onslaught and the late Professor X, Red Skull goes against the Avengers and the X-Men. In the middle of the battle, Scarlet Witch and Doctor Doom cast an inversion spell that changes everyone’s moral alignment. With the heroes acting as villains and the villains acting as heroes, the stakes are higher than ever.

Morality change is a common topic in comics, but AXIS takes it to the next level, opening the door to a whole new realm of possibilities. Unfortunately, this event didn’t get as much attention as it should have. Most likely because it didn’t have enough marketing. AXIS was created by Rick Remender with several different artists, like Adam Kubert, Leinil Francis Yu, Terry Dodson, and Jim Cheung.

1/10 Siege Was Too Short For The Fandom’s Taste

Under the claim that Asgard (which now floats on top of Broxton, Oklahoma) is a danger to humanity, Norman Osborn sends military troops and the Dark Avengers to lay siege. In order to protect Thor’s home, the Avengers join the battle. Siege is the climax of the Dark Reign arc.

Siege, by Brian Michael Bendis and Olivier Coipel, is the peak moment of one of Marvel’s biggest, most radical arcs and it definitely delivers. However, it was barely acknowledged by the fans and received poor critics. Some believe this was because it was too short for the type of story it tried to offer.

NEXT: 10 Marvel Events That Didn’t Live Up To The Hype