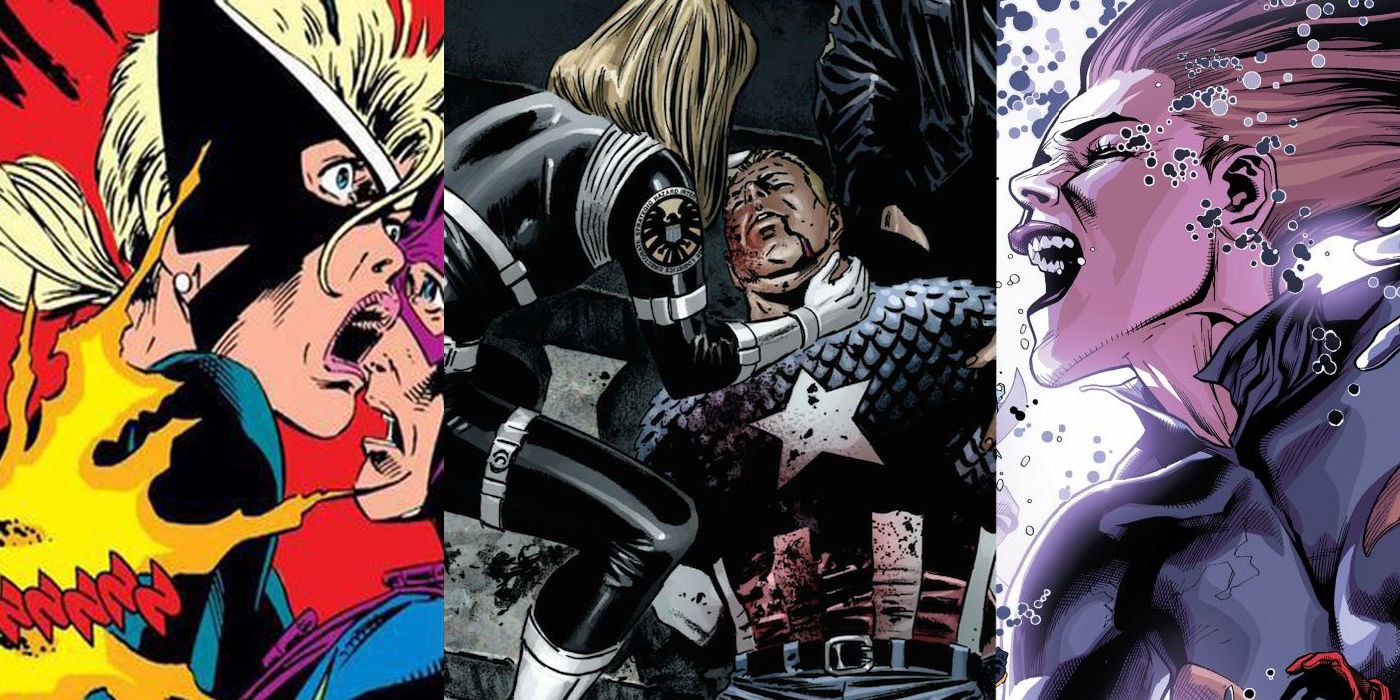 Being a member of the Avengers isn’t easy in Marvel Comics. Brought together to stop various menaces from across the cosmos, they’re willing to do what is necessary to save their universe, which includes paying the ultimate price.

Giving up one’s life comes with the choice of becoming a hero. Though comic book characters often come back from the dead, their sacrifices are still admired and memorable. Whether it’s a reserve member or a beloved icon, Avengers like Captain America, Iron Man, Mockingbird and more gave their lives to protect humanity, earning their spot within the Earth’s Mightiest Heroes roster.

Some of the Avengers’ greatest members share checkered pasts. The Swordsman was Hawkeye’s former mentor who betrayed him to become a mercenary. When he first joined the Avengers, he was branded a traitor for reluctantly working with the Mandarin to kill Iron Man. From there, he tried to destroy the team multiple times.

That all changed when the superhero Mantis entered his life, helping him reform and get reinstated with the team. His time as an Avenger was cut short when he sacrificed his life to save Mantis from Kang the Conqueror, becoming the first Avenger to die in combat and earning his status as a true hero.

The Young Avengers represent the future of Marvel Comics, inspired by Earth’s Mightiest heroes to use their powers for good. Stature, the daughter of formerly deceased Scott Lang, tried to honor his legacy by joining the teen team. While on mission to locate the Scarlet Witch, Stature managed to rescue her father before he died, reuniting the two for a short while.

RELATED: 10 Avengers Who Deserve A Comeback

Her mission led to the Young Avengers fighting Doctor Doom, who now possessed Wanda’s powers. Stature sacrificed herself to once again protect her father. Even though Doom was defeated, both the Avengers and the Young Avengers watched as Scott Lang cradled the body of his dead daughter in his arms.

The Masters of Evil Masters of Evil have plagued the Avengers since the beginning. Trying to destroy the team on the inside, Zemo recruited disgraced businessman Simon Williams and turned him into the superpowered Wonder Man. Though acting as a mole in the Avengers, Wonder Man grew to respect the heroes.

Though he betrayed the Avengers, Wonder Man had a change of heart and double-crossed the Masters of Evil. However, he died due to his powers killing him from the inside, gaining the Avengers’ respect and finally understanding what it means to be a superhero.

7/10 Mockingbird Gave Her Life To Save Her Lover

The team of Hawkeye and Mockingbird was one of the most underrated romantic duos in Avengers history. Their drive for adventure and witty banter made them a beloved couple among comic readers. Sadly, fans watched as the relationship between the two lovebirds slowly dissolved, ending in divorce.

There was a glimmer of hope when Mockingbird returned to the team, rekindling her romance with her ex-husband.This didn’t last long as a battle with the demonic Mephisto saw Mockingbird sacrifice herself to save Hawkeye, dying in his arms. Though revealed to be a Skrull imposter years later, this moment shocked many readers who wanted to see the couple get back together again.

The inclusion of Thor in the Avengers’ ranks has seen the Avengers battle various mystical threats over the years. During Fear Itself, his long-imprisoned uncle, the God of Fear Cul, was freed by the daughter of the Red Skull. He took possession of various Marvel heroes and villains and used them to spread chaos across the globe.

To save Earth and Asgard, Thor valiantly battled Cul, succumbing to his wounds after defeating his uncle. His teammates and the rest of the Nine Realms attended his funeral, honoring the brave god’s courage and self-sacrifice.

5/10 The Wasp Was The Skrulls’ Secret Weapon

In the aftermath of Civil War, long-time Avengers The Wasp and her ex-husband Hank Pym joined Iron Man’s Initiative to assist in restructuring the superhero status quo. During this time, Hank gave Janet an experimental dose of Pym Particles, unaware that he was one of many Skrull spies sent to infiltrate Earth for an incoming invasion.

These Particles turned Janet into a giant time bomb. So to contain the explosion, she had Thor use his hammer to teleport her off-world, detonating far from Earth. Though she barely survived, her apparent death shook the Avengers, especially the real Hank, who became the Wasp in her honor.

4/10 The Fall And Redemption Of Iron Man

Iron Man is considered to be one of the Avengers’ greatest members. From his genius intellect to his various battle suits over the years, he has proven himself a worthy Avenger over the years. However, fans were shocked by the discovery that Tony Stark was actually a traitor during The Crossing event.

Manipulated by Kang, he sought to destroy his former teammates. Freed by a time displaced teen Tony Stark, he ended up sacrificing himself to defeat Kang and save his friends. His passing, albeit short thanks to the Heroes Reborn event, was painful to both the Avengers and the comic community.

Releasing crisis and crisis, she unleashed several of the Avengers’ greatest enemies against them. Badly injured, Hawkeye sacrificed himself by blowing up a Kree armada battleship on the inside. Though she brought him back to life, he became jaded from the experience, yet immediately went back to the team under the guise of Ronin.

Though not a founding member, Captain America stands as one of the Avengers greatest leaders. His tactical prowess and moral code admired is admired by friend and foe alike. However, his beliefs were tested during the turbulent Civil War, fighting Iron Man and many former allies from enforcing the Superhuman Registration Act.

However, near the end of the conflict, Rogers gave himself up to the government, in order to protect those who opposed the law from being arrested.His sacrifice, though peaceful, ended in tragedy with the hero being assassinated by a mind-controlled Sharon Carter. His death affected many heroes, becoming a martyr for freedom in the process.

1/10 The Avengers Gave Their Lives Against An Entity

During a battle between the X-Men and Magneto, Professor X tried to subdue his former friend via psychic attack. The result was the creation of Onslaught, a psionic being made from both men. Both the Avengers and The Fantastic Four were called to arms when the creature kidnaped Franklin Richards and Nate Grey for his own nefarious plans.

Though they put up a good fight, the nearly invincible monster couldn’t be stopped. In the end, it took the combined powers of the Avengers and Fantastic Four to contain the beast, with Onslaught dissolving, killing both teams in the process. The world thought their defenders were gone for good, unaware that Franklin used his powers to place the heroes on an alternate Earth.

NEXT: 10 Most Tragic X-Men Sacrifices