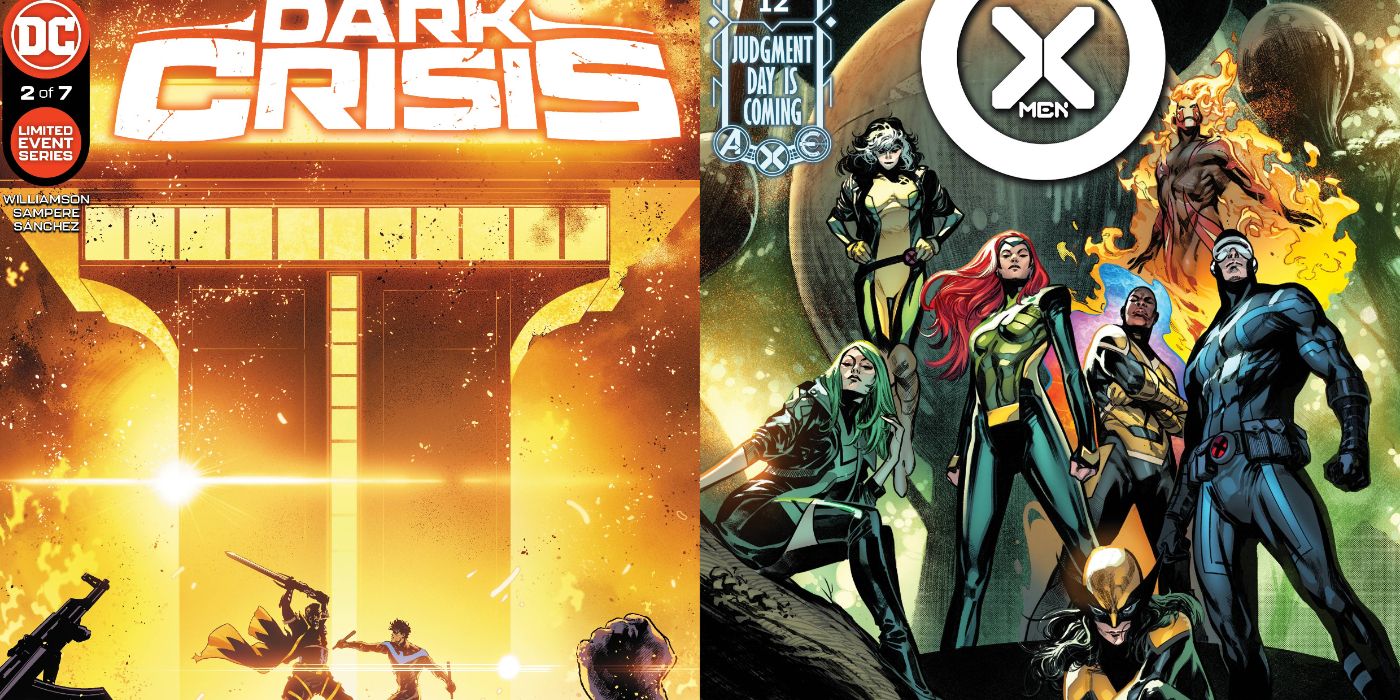 All told, 2022 was pretty good for Marvel and DC Comics. The Big Two put out a lot of really great comics, launching new series and putting storylines in continuing books that wowed readers. Of course, the opposite is also true. Both companies made some huge missteps this year that sometimes overshadowed the more beloved aspects of their publishing schedule in 2022.

Disappointment is pretty normal for most comics fans, but sometimes things happen that everyone just hates. Great books sour, events underperform, and creators drop off in a variety of ways. 2022 has some big examples of this in series like Justice League and X-Men.

10/10 Justice League Wasn’t What It Should Have Been

Justice League was DC’s biggest book after its 2018 relaunch, but once writer Scott Snyder left and Death Metal ended, it fell off big time. Writer Brian Michael Bendis came onboard, but like much of his other DC work, fans were completely divided over it. 2022 didn’t really fix this at all, as his run ended to a resounding meh from most fans, since many of them stopped reading the book.

Justice League #75, by writer Josh Williamson and artist Rafa Sandoval, kicked off the build-up to Dark Crisis on Infinite Earths but even that was too little, too late. The book wasn’t what it should have been, with even devoted Justice League fans disappointed. There are many things DC should do better, and the Justice League is one of them.

When it was announced, fans were excited about The New Champion of Shazam. Created by Josie Campbell and Evan “Doc” Shaner, the book focused on Mary Marvel becoming the main Shazam. This was a concept that a lot of readers were interested in, and Shaner’s art was the icing on the awesome cake.

However, it was soon announced that instead of being an ongoing series, it would be a four issue miniseries. Readers were not happy about this at all. DC was already hurting for female fronted books and Mary Marvel is basically beloved by everyone. It’s a huge disappointment that DC did this.

Geoff Johns was DC’s biggest writer in the 2000s, beloved by fans and considered among the best in the industry. However, the 2010s would see him fall from the esteem of many fans, his New 52 Justice League being a huge reason for that. Johns had always showed a proclivity to expand on Alan Moore’s DC ideas, to mixed results, and after Doomsday Clock everyone hoped he’d be done with that.

Johns took some time off from DC before returning in 2022 with Flashpoint Beyond, a book that ended with him including characters and concepts from Doomsday Clock. Johns is still trying to sell his expanded Watchmen universe to DC fans, and they’re all tired of it.

DC has a Batman problem. The publisher has been putting out way too many Batman books, mostly because Batman sells. Whenever a new big name creator comes to DC, their first project is usually a Batman one. This has resulted in a company that has most of its chips placed on Batman. Batman is all well and good, but many fans are tired of all the Batman books.

DC has many of the greatest comic characters ever. Fans want those characters to get more spotlight, but it seems like instead of that happening, there’s just more Batman books.

Jonathan Hickman started the Krakoa Era, changing the X-Men forever. However, fans would never get to see the end of Hickman’s X-Men story because he, Marvel, and the other X-writers decided that he should leave. Since then, new writers and artists have come into the line, new books have been launched, and events stories have happened, but the line feels rudderless.

With Hickman as Head of X, there was a feeling of cohesion, that everything was moving one way. Now there are a bunch of different books, all going in different ways, with some occasionally working together. There’s no cohesion and many books have suffered for it.

Critics and Marvel fans don’t always agree, and Hulk, by writer Donny Cates and artists Ryan Ottley and Martin Coccolo, has been a prime example of that. Critics have liked the book, while fans have been vocally against it. The biggest problem is that after The Immortal Hulk, fans want something more like that than what Cates has done.

In general, 2022 has seen Cates fall in readers’ estimation and Hulk was endemic of his fall. He’s since left the book – and everything else he’s writing at Marvel and beyond, but Hulk is his biggest failure with fans since 2017’s God Country.

Being a Spider-Man fan hasn’t been easy, and 2022 hasn’t been any better. Marvel relaunched The Amazing Spider-Man with writer Zeb Wells and regular artist John Romita Jr., but fans were immediately unhappy with it. The book started months after the last time readers had seen the characters, with Spider-Man having done something that angered everyone.

Worse for many fans is that Mary Jane and Peter’s relationship was over, and she was married to someone else. It’s an extremely frustrating turn of events for Spider-Man fans. The mystery box storytelling of TASM hasn’t done it any favors and fans hate the changes the mystery wrought on Spider-Man’s status quo.

3/10 Avengers Has Been Largely Lackluster

2018 not only saw Justice League relaunched with an A-list creative team, but Avengers as well. Writer Jason Aaron and artist Ed McGuinness took over Avengers, but the book never really lit the world on fire. Sales were fine, but it felt like a minor part of the line, off in a corner doing its own thing. 2022 hasn’t been any better.

Despite the launch of Avengers Forever and the build-up to Aaron’s final Avengers story, fans just don’t really care about Avengers. Marvel has barely pushed the bookand it feels like it’s been years since the book was the focus of Marvel’s line in the 2000s.

2/10 Dark Crisis On Infinite Earths Has Underwhelmed Many

Dark Crisis on Infinite Earths is winding down, but it’s impossible to say that it’s been a success. Written by Josh Williamson with art by Daniel Sampere and Rafa Sandoval, the book didn’t really grab fans right off the bat. While some have come around as the book gets near its end and more stellar tie-ins are put out, the DCoIE has disappointed many.

The pacing of the book has been a big problem, as most of the first four issues was just slow paced set-up. The premise of the book is rather simple, which explains the padding of the early issues, but it hasn’t set the world on fire.

Not every Marvel book survives a writer leaving. X-Men is a perfect example of this. It was the flagship series written by Jonathan Hickman, setting up plot threads and event books. However, 2021 would see the book relaunched under writer Gerry Duggan. Many fans were not happy with his work on the book. 2022 has seen more of the same.

Duggan’s writing on the book is anemic. The plot lines are simple action stories with bare-bones characterization that somehow still manage to be bad. The art has been the only consistently good part, but it can’t save the book. X-Men was a must-read Marvel comic several years ago, and now it’s better if fans just skip it.

NEXT: The 10 Worst-Written Female Characters In Marvel Comics