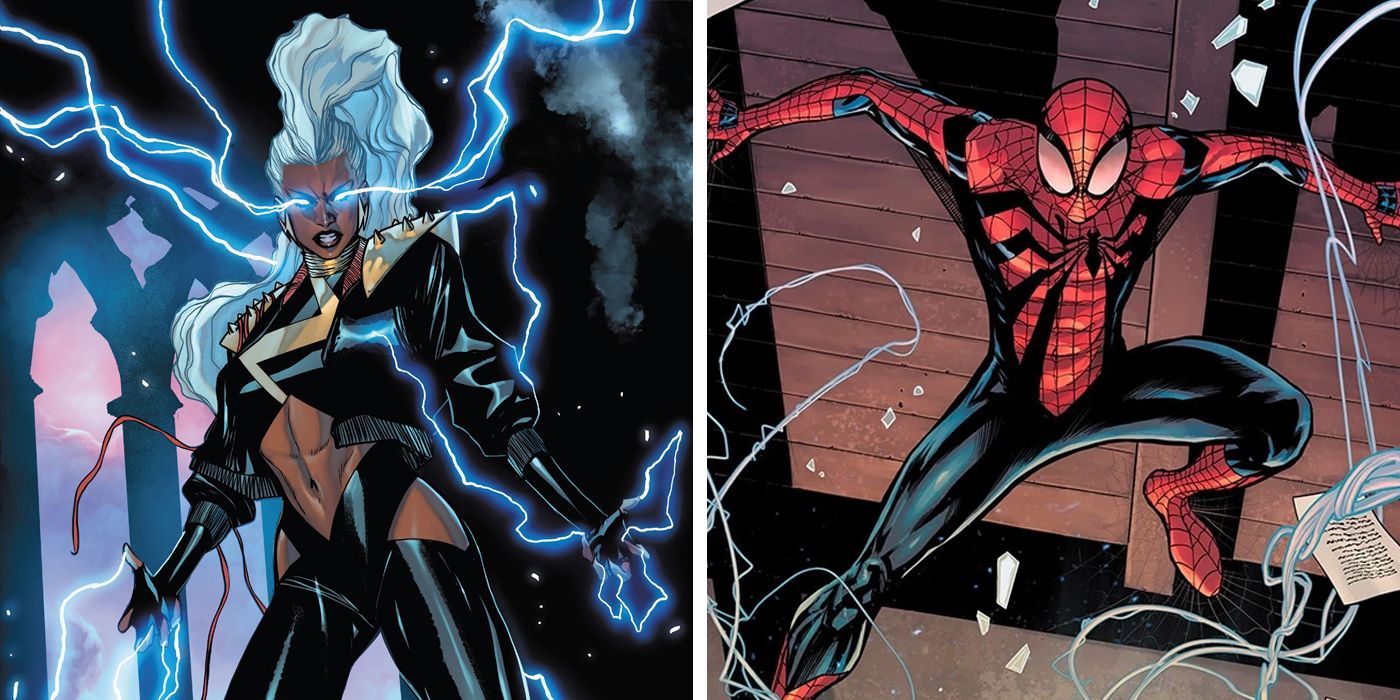 2022 has been full of nostalgia for Marvel Comics fans, particularly where the X-Men are concerned. Many characters saw a return to costumes from the 90s to go along with new titles featuring the 1990s-era X-Men. The yellow and navy bodysuits were back, along with Rogue’s iconic yellow and green spandex with a bomber jacket. Magneto donned his traditional red and purple for his move to Arakko, and Wolverine returned to his classic yellow and brown era.

Heroes from across the Marvel Comics universe dressed up in their best for the annual Hellfire Gala, and even for ordinary outings, like She-Hulk meeting Hellcat for cake in pretty dresses. Whether Marvel was introducing new faces or just new looks, it was an exciting year in hero fashion.

Emma Frost is not always the best written character, but she is one of its best dressed. As one of the world’s most powerful Mutants, leaders, and businesswomen, Frost takes great pride in her appearance. Her Mutant powers mean that she never has to appear disheveled in front of other people.

Over the years, creators have given Emma Frost some truly spectacular outfits, though they also tend to be incredibly revealing or even physics-defying. In her new role as a leader of the Mutant nation, however, Frost has adopted a look that is more modest, with bare shoulders, but the rest of her body covered, along with a build-in cape. Her new look is stylish but appropriate for a world leader.

Ben Reilly is a clone of Peter Parker who took over as Spider-Man after Peter suffered catastrophic injuries. His journey over the year has been a complicated one, starting as a corporate-sponsored but still ethical hero, but gradually devolving into an outright villain after the Beyond Corporation messed around with his head.

Ben has worn two of the most interesting Spider costumes of the year–his Spider-Man costume with an asymmetric spider logo is an interesting modern twist on the classic Spidey look. Now that he has become the villain Chasm, his new look is also amazing, with a purple base and aqua highlights that transform into moving streams around him.

8/10 Sersi Was The Most Fashionable Eternal

Sersi is probably the most well known of the Eternals, a group of immortal beings created by the god-like Celestials to safeguard the Earth. During this year’s AXE: Judgment Day event, she broke ranks from some of her fellow Eternals to help the heroes of Earth defend the planet from her colleague Druig and the Progenitor.

Sersi is always impeccably dressed, whether in or out of uniform. Her usual professional attire is a sheer purple tunic with split sides for ease of movement. The sheer fabric is contrasted with thigh-high boots and geometric patterns of shiny black for a dramatic and flattering look.

7/10 Storm Needed A New Look For A New Planet

Ororo Munroe, or Storm, has been through a lot of changes this year. She started the year on Krakoa’s Quiet Council, then also joined the ruling council on Arakko (formerly the planet Mars), where she mostly focused her attention. She and former opponent Magneto formed the Brotherhood of Arakko to protect the people of that planet.

Arakko is a wild place that operates by different, more brutal rules than most of Earth. Storm’s new look reflects that wild side, with elements that are reminiscent of costumes seen in the post-apocalyptic Mad Max movies. Her outfit also references comic villain costumes of the 90s, when Magneto and his Brotherhood of Mutants were fighting the X-Men. A new, wild planet called for an aggressive new look.

6/10 Frederick Dukes Is No Longer The Blob

Traditionally, Frederick Dukes (unfortunately nicknamed the Blob), has not been put in flattering costumes. Dukes’s Mutant power made him incredibly fat, and over the years, he has been bullied mercilessly for his weight. This bullying no doubt contributed to the lack of self-esteem that caused Dukes to initially become a villain.

Since moving to Krakoa, however, Dukes has undergone a remarkable personal transformation. He now works as the bartender for the main drinking hole on Krakoa, where he is generally liked and respected by his peers. He has traded in the skin-tight leotards for a more comfortable and flattering Hawaiian shirt, and he has never looked happier or more stylish.

5/10 Spider-Gwen Has The Best Spider-Verse Costume

Ever since her introduction as a character in Spider-Verse in 2014, Spider-Gwen has been one of the best dressed heroes in Marvel Comics. Her costume hasn’t changed much since her first appearance, but why mess with perfection? Spider-Gwen is setting the standard for her arachnid-inspired companions.

Spider-Gwen’s costume, like most Spider-Verse heroes, is a play on the original Spider-Man costume. In Gwen’s version, a hood adds a youthful feel to the costume. The pink and turquoise color scheme echoes Spidey’s red and blue, but more playful. Her ballet slippers are the perfect finishing touch, allowing her secure footing while saving the world.

4/10 Shang-Chi Has Been Connecting With His Heritage

Over the course of 2022, Shang-Chi has been learning more about his family history and origins. His current fashion choices reflect that focus, drawing inspiration from traditional Chinese fashion and clothing worn for Chinese martial arts training. The end result is practical and fashionable.

The gold trim on his costume echoes the gold in Shang-Chi’s ten rings, which he wears on his arms and are his weapon of choice. The loose-fitting pants make moving and fighting easy, as does the sleeveless belted tunic with a traditional Mandarin collar. Dragon scales on the gold trim of his tunic complete this appropriate and stylish look.

3/10 Clea Strange Is More Powerful And Fashionable Than Dr. Strange

After the death of Stephen Strange, his Faltine wife Clea took over as Sorcerer Supreme in the comic series Strange. Clea is an incredibly powerful magic user from the dark dimension, and upon his death, Dr. Strange left her his cloak and the Eye of Agamotto to enable her to protect his world.

Because of her relationship with Dr. Strange and the gifts he left her, Clea Strange’s costume bears many similarities to the traditional Dr. Strange costume. Her magical abilities allow her to change her clothing easily, however, and she often shifts into alternate but equally fashionable choices on a whim.

2/10 Wiccan Wears The Universe On His Costume

Wiccan is a powerful magic user and the reincarnated son of the Scarlet Witch. The origins of his powers are a bit of a mystery, but the powers themselves are undeniably epic. His sense of fashion is nearly as strong, whether he’s saving the universe in his hero costume, or going on a date with his husband, Hulkling.

Wiccan’s main costume consists of a tight bodysuit and cape. The red cape is inscribed with mystical looking lines, but the real stand-out is his bodysuit. The main color of his suit is black, but panels along the top and sides of the suit display sparkling, changing images of stars and galaxies.

1/10 The Hellfire Gala Showed Hero Fashion At Its Best

One of the biggest social events of the year within the Marvel Comics universe was the Hellfire Gala, hosted by the always well-dressed White Queen, Emma Frost. Heroes from Earth and beyond showed up to this formal event wearing glamorous evening wear that was clearly designed to outshine their peers.

She-Hulk’s questionable parachute pants aside, the looks at the Hellfire Gala were spectacular. Some made reference to their powers, like Emma Frost’s diamond-shaped cut-outs, while others referenced their usual costumes, like Captain America’s red white and blue pinstripe suit. The looks at the event were many, varied, and completely glorious.