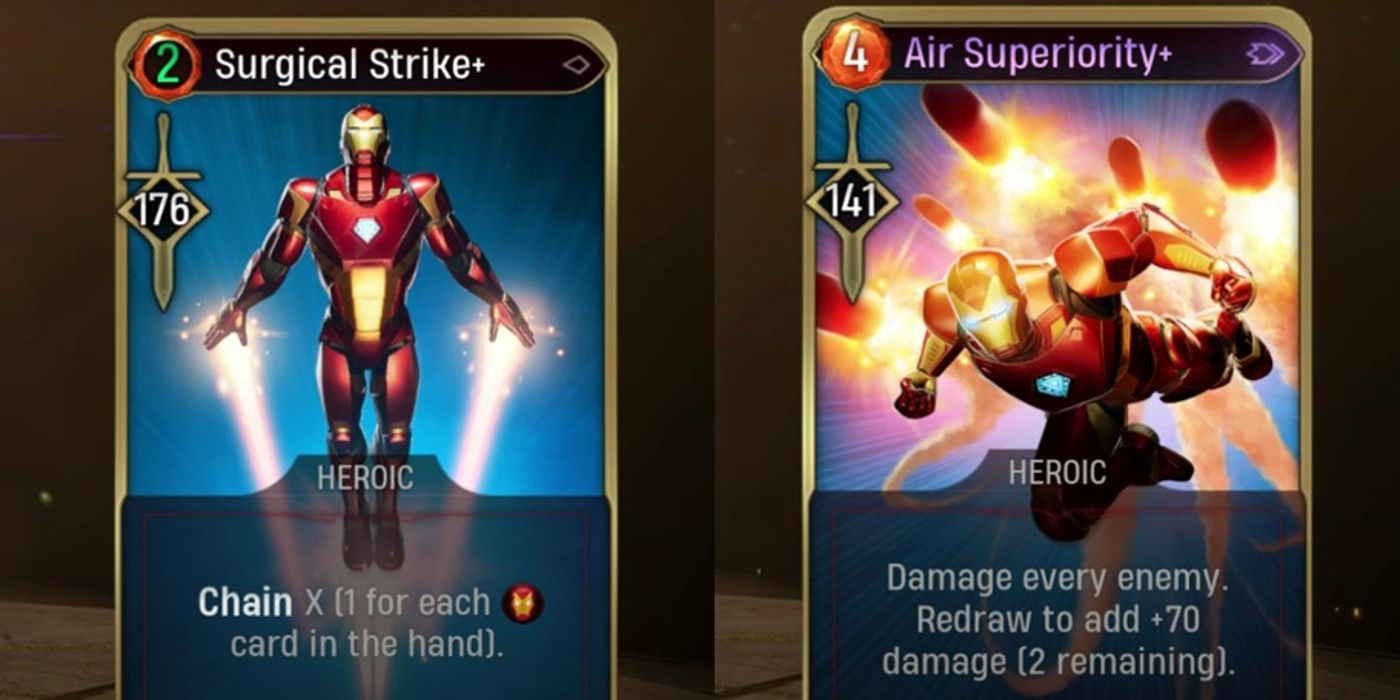 After debuting on December 2, 2022, avid gamers quickly realized that playing with Iron Man in Marvel’s Midnight Suns is one best gameplay options available. Listed as a Utility character who balances the ability to attack, block, and buff teammates with equal skill, many of Iron Man’s cards actually get stronger the more they are used, which differs from a supporting character like Doctor Strange.

New Plan is a Skill Card that enables Iron Man to instantly double the amount of Heroism whenever it is played. For the uninitiated, Heroism is a form of currency accrued by playing Attack and Skill cards and is used to unlock Heroic Cards. The more Heroism a player has in the game, the more Heroic Cards they can play, and the further and the easier they can defeat certain enemies.

RELATED: 10 Members Of The Midnight Suns That Weren’t In The Trailer

Once upgraded, New Plan+ will also draw a new Heroic Card for Iron Man to use. While helpful, there will be times in the game when the number of Heroism (1) is low it really doesn’t help that much to double it 2. Moreover, New Plan only affects Heroic Cards, meaning most players are bound to avoid stacking it in Iron Man’s deck.

The most common Attack Card, Blast simply enables Iron Man to deliver a meager 5 Knockback Damage to enemies swiftly. If redrawn and upgraded to Blast+, the card will grant Forceful, exponentially increasing the knockback power of Iron Man’s attack to 60 Damage.

While Blast is useful for the early part of the highly acclaimed tactical RPG, especially since it generates 1 Heroism each time it’s played, there are far more powerful and multifaceted cards in Iron Man’s deck. Moreover, almost every hero in the game has a similar basic attack card, which makes it redundant when teamed with Attackers and fellow Utility characters.

Precision is a handy Skill Card that enables Iron Man to use his next card for free without being discarded afterward. If Precision is redrawn, it will reduce the cost of Heroism by 1 point. This essentially doubles the power of any card in Iron Man’s deck and should be kept at all times. While free to use, the upgraded version Precision+ costs 2 Heroism, which kind of neutralizes the redraw perk.

RELATED: Marvel’s Midnight Suns – 9 Comic Villains Who Should Be In The Game, According To Reddit

Pairing Precision with cost-heavy cards like Hellfire Beam or Surgical Strike is an ideal way to utilize Iron Man’s most potent abilities without draining valuable resources. Best used with Iron Man’s Legendary Card, playing with or without Precision won’t make a huge difference either way.

Heads Up is a rare Skill Card that gives great protection to Iron Man and his allies in the stellar modern superhero video game. When played, Heads Up will grant 66 Block to Iron Man or his teammates, which can be upgraded to Heads Up+ and give 282 Block plus 2 redraws. The card also generates 2 Heroism each time it’s played, making it extremely important to keep it in Iron Man’s deck.

Although vital to keeping himself and his teammates free from harm by absorbing incoming damage without harm, no hero can have more Block than their max health, which tends to detract from its value. Moreover, Iron Man is best used as an offensive-based DPS on his team rather than a defensive-minded protector, which takes the card down a peg or two.

As Iron Man’s only Legendary Card, Hellfire Beam is somewhat underwhelming. The card allows Iron Man to destroy enemies only if they are formed in a line. Hellfire Beam delivers 21 Damage, which can be increased by +70 if redrawn, but only if an enemy is knocked out. The card’s best attribute is the unlimited redraws.

Despite the destructive power of the Hellfire Beam and unlimited redraws, too many unique circumstances have to line up just right to use it optimally. It also costs 3 Heroism to play, making it tough to negotiate when to use the card relative to how much Heroism a player has. Most players prefer Iron Man’s Air Superiority card for DPS because of its massive damage relative to its cost and inconvenience.

Quick Blast is an Attack Card that swiftly knocks back enemies and allows Iron Man to redraw a card after each KO. While the damage dealt from each Quick Strike is limited (7), the ability to add cards to the deck directly benefits other abilities like Surgical Strike, which depends on the number of cards to be effective. As such, it’s important to keep Quick Blast in Iron Man’s deck at all times.

RELATED: The 15 Hardest Enemies In Marvel’s Guardians Of The Galaxy Game

Even more beneficial, if Iron Man redraws a Knockback card and uses the ability to fatally knock one enemy into another, a third card will be added to Iron Man’s deck. An advantageous way of landing quick knockouts while also ensuring a stacked deck, Quick Blast is a valuable 2-for-1 card to keep.

Mark Target is a Skill Card that enables Iron Man to Mark enemies for easy attack and increases their Vulnerability to make them take more damage. Using the Market Target will also refund players with a new card if they knock out the enemy in 2 turns. If Mark Target happens to be redrawn, it will Mark AoE enemies nearby, making it much easier to know who and where to fight and what weakness they have to exploit in the comic-book-inspired video game.

Additionally, the more enemies are knocked out during AoE skirmishes, the more cards Iron Man will be granted in return. A great way of ensuring more turns and keeping a full deck, Mark Target also generates 2 Heroism each time it’s played. The vast versatility of Mark Target makes it more valuable than most.

Surgical Strike is a fantastic Heroic Card that delivers 26 Damage to enemies at once by using Chain, a devastating status effect that selects multiple targets or the same target multiple times. While the card costs 3 Heroism to play and can’t always be cast as a result, it will attack the same number of times as the number of cards held in Iron Man’s hand. Therefore, Surgical Strike is best used when Iron Man has amassed a full deck.

While Surgical Strike is less effective when Iron Man has a short deck, the card can be concentrated on several targets at once or on a single boss with immense health, giving Surgical Strike a versatile leg up on many of Iron Man’s more passive cards. With later mods, the card will also grant random redraws for each enemy knockout.

Leave It To Me is a potent Skill Card that allows Iron Man to draw 2 new cards and 2 redraws to buff other abilities like Blast, Surgical Strike and Quick Blast. When upgraded, it provides Iron Man with 2 Fast as well, which lowers the cost of using other Heroic Cards by one and makes it much cheaper to utilize abilities like Surgical Strike or Hellfire Beam.

More beneficial yet, each time Leave It To Me is played, it grants Iron Man 2 Heroism. Unlike Heroic Cards that cost Heroism to use, Leave It To Me not only provides Iron Man with extra cards that bolster the power of the entire deck, but it also enables him to stock up on Heroism for later use in the acclaimed superhero video game.

If Surgical Strike is the best card to use when Iron Man has a full deck, then Air Superiority is the best card Iron Man can use with a short deck. The Heroic Card enables Iron Man to deliver decent damage to every single enemy in sight. If the card is redrawn twice, it will double the amount of damage Iron Man can doll out.

While it may deal slightly less DPS than Surgical Strike, Air Superiority isn’t dependent on the number of cards in Iron Man’s deck, which gives it more value and versatility even though it costs 4 Heroism to use. Air Superiority also simultaneously targets every enemy on the battlefield without fail, making it the single most efficiently deadly card Iron Man can utilize to keep his teammates safe.

NEXT: Marvel – 10 Things About The Midnight Suns Team That Comic Fans Already Know